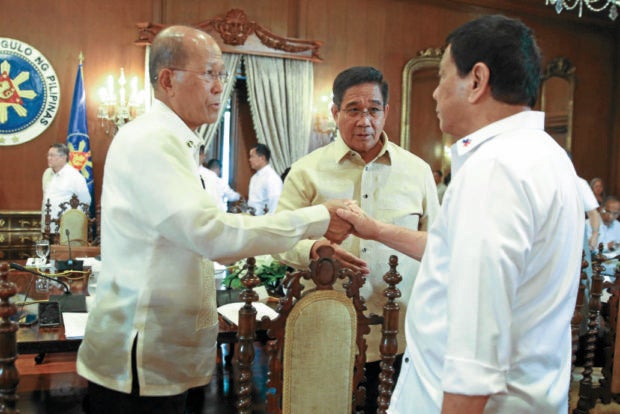 MARAWI CITY – Defense Secretary Delfin Lorenzana said on Thursday, that President Duterte received feelers for a negotiation with militants in the early weeks of the Marawi crisis.

Ominta was was arrested by the police in Masiu, Lanao del Sur on June 9.

“I know that the President received some feelers from the mother of the Mautes. Pero at that time marami na kasing tayong casualties so ang sabi nya hindi na ako makipag-usap. Ituloy nalang natin ito. (But at that time, there had been many casualties among soldiers and civilians so he said, ‘I’m not negotiating anymore.  Let’s just proceed with the battles.’) Now, I don’t know if there are other feelers made along the way,” Lorenzana said.

Lorenzana was reacting to the report that Agakhan Sharief alias Bin Laden, a prominent Moro leader in Marawi, claimed that the President was preparing to make a deal with Maute but aborted the plan without explanation.

“Talking to them does not mean we are negotiating. I think the policy of the government is talagang matigas yan (they’re really hardliners). No negotiation with terrorists,” he said.

“Yung feeler na yun because it’s the mother trying to talk to the President. Siguro bumigay rin ang kalooban nya. But at that time, marami na tayo casualties in the field kaya no more talks (The feelers were considered because it was the mother trying to talk to the President.  His feelings might have softened a bit at that point. But at that time, there were too many casualties in the field, on the
government and civilian sides, so no more talks),” he explained.  SFM