Panelo: Duterte may declare another martial law in Mindanao if needed 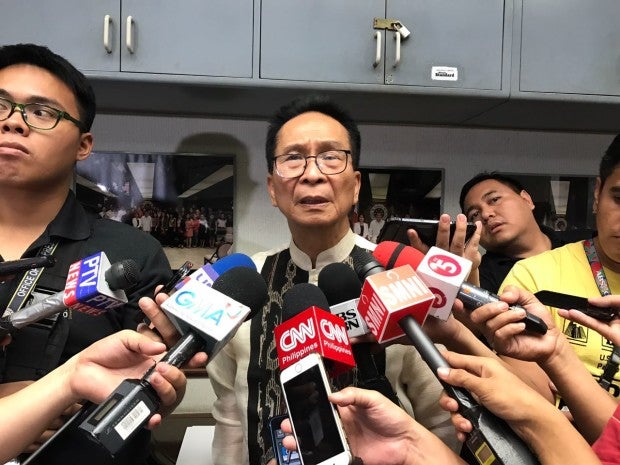 President Rodrigo Duterte could declare another martial law should he seek to extend his current declaration in Mindanao and Congress won’t approve it, his chief legal counsel said on Wednesday.

Presidential Legal Counsel Salvador Panelo was asked what the President would do once his martial law declaration in Mindanao had reached the 60-day limit.

“If Congress does not extend on the 60th day upon initiative of the President then there can be no extension. Another proclamation is necessary,” he said in a text message to reporters.

Under the 1987 Constitution, the Congress, upon the initiative of the President, “may extend such proclamation [of martial law] or the suspension [of the writ of habeas corpus] for a period to be determined by the Congress, if the invasion or rebellion shall persist and public safety requires it.”

In a Palace briefing, Armed Forces of the Philippines (AFP) Spokesman Brig. Gen. Resituto Padilla said the military may seek extension of martial law in Mindanao if necessary, citing that they have not assessed yet if they have already met the “conditions” determining the need for the persistence of military rule in the area.

“We have set conditions that would specifically act as the standards whether martial law [in Mindanao] should be extended or not. [But] the assessment regarding whether those conditions have been met has not yet been made,” Padilla said.

He reiterated that the military won’t set a deadline on the liberation of Mindanao from the Maute terrorists, saying it would be “unfair to the troops,” as they were already focused in monitoring the presence of the terrorists all over the archipelago through manhunt operations.

“We are doing our best to finish this once and for all. With the way our progress is going on, we are confident with a positive indication of the movement of our troops in the area that we are occupying,” he said.

Padilla said that the AFP would have been able to carry out military operations in Mindanao even without the aid of martial law, but not as expeditious as allowed by the presence of the military rule.

“Since martial law was there, and the writ of habeas corpus was suspended alongside the declaration, it expedited the process,” he added.

During President Rodrigo Duterte’s visit at the wake of the Bulacan massacre victims on Tuesday, he said that the extension of martial law is upon the decision of the military.

“Our number one duty is to defend and protect the Filipino people,” he told reporters.

Duterte imposed martial law on May 23 after the AFP and the Philippine National Police told him during his visit in Russia that Marawi was in a “critical situation” following the attacks carried by Islamic State-allied gunmen.

The Supreme Court on Tuesday validated Duterte’s proclamation of martial law in Mindanao, deeming it legal and constitutional.

The martial law, which the Constitution limits to 60 days, is supposed to ‪end on July 22. With a report from Winona Sadia, INQUIRER.net trainee/JE