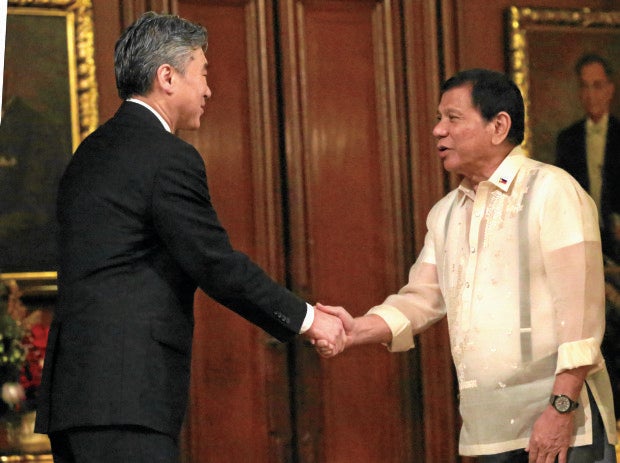 The US ambassador to the Philippines has relayed to President Duterte Washington’s reaffirmation of its full support for the country’s counterterrorism efforts.

Duterte met with US Ambassador Sung Kim at Malacañang on Monday and discussed ways to combat terrorism and rehabilitation efforts in Marawi City.

“The Ambassador reiterated the US government’s full support for the Philippine government operations in Marawi as well as in its reconstruction and rehabilitation efforts for the Islamic city,” presidential spokesperson Ernesto Abella said in a Palace briefing on Tuesday.

The US government has expressed its commitment to combat terrorism in the country by providing mainly technical assistance, such as intelligence and surveillance, to the Armed Forces of the Philippines (AFP) in its efforts to rebuild the strife-torn Marawi City.

During the meeting, Kim had also conveyed to Duterte that Washington is considering strengthening trade relations with the Philippines by approving the duty-free entry of travel goods from the country to the US, Abella said.

“[The US government] will generate 70,000 new domestic jobs and an additional P5 billion in revenues annually,” he added.

In a Twitter post on Monday, Kim said he had a “great discussion” with Duterte as they both reaffirmed both countries resolve to address terrorism, including the rehabilitation efforts in Marawi City.

Abella said that Kim had also lauded the Philippines for maintaining its Tier 1 ranking in its anti-human trafficking program after complying with the international standards as shown by a US State Department annual report released in June. Winona S. Sadia, INQUIRER.net trainee