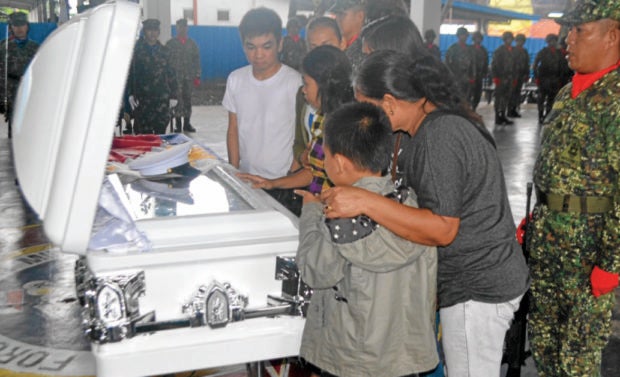 HOMEIS THE HERO His family in mourning, Marine Sgt. Brian Tamboon arrives in a coffin to a hero’s welcome in Zamboanga City. He was buried in one of the city’s poor communities. —NAVAL FORCES WESTERN MINDANAO PAO

ZAMBOANGA CITY — A bullet struck the helmet of Marine Sgt. Brian Tamboon as he and his squad raced to a building for a better vantage point against Islamic State-inspired terrorists holding their ground in Marawi City on Thursday.

Tamboon knew the bullet pierced his helmet but thought it just grazed his head and told his men that his injury was nothing, that he was OK, his wife, Chinaline, said, quoting a colleague of her husband.

But when he removed his helmet, his men saw that the bullet had penetrated the right side of his forehead. They took him to the nearest medical station, where he was declared dead on arrival.

Home in a coffin

On Sunday, Tamboon, a sniper, returned home here in a coffin.

He was the 17th Marine to be killed in the fighting in Marawi and one among at least 84 military and police fatalities since the terrorists laid siege to the city over a month ago, according to the Western Mindanao Command.

More than 500 other soldiers have been wounded.

Three hundred thirty-six terrorists and 32 civilians have been killed since the fighting started on May 23.

Some of the bodies of civilians were found decapitated and the military warned that the number of residents killed by the terrorists in “atrocities” could rise sharply as troops retook more ground.

As troops poured in to break the siege, few were expecting a slow, difficult and unfamiliar urban war.

“We are used to insurgencies … but a deployment of this magnitude, this kind of conflict is a challenge for our troops,” said Lt. Col. Christopher Tampus, one of the officers commanding ground operations in Marawi.

He said progress in clearing the city had been hindered by sniper fire and booby traps like gas tanks rigged with grenades.

After weeks of military airstrikes and shelling, Marawi, a lakeside city of around 200,000, is now a ghost town, the center of which has been reduced to charred rubble and hollow structures.

Buildings in the military controlled areas of the city are still standing but deserted after residents fled.

Authorities estimate around 100 to 120 fighters, some of them as young as 16 years, remain holed up in the commercial district of the city, down from around 500 at the beginning of the siege.

The fighters are holding around 100 hostages, according to the military, who have been forced to act as human shields, take up arms or become sex slaves.

Military aircraft drop bombs on the terrorist-held zone almost every day. From the outskirts of the city, mortar teams take aim at what they call “ground zero,” the heart of the conflict.

“Mortars are designed to target people and smaller areas than the airstrikes,” a mortar specialist, Sgt. Jeffery Baybayan, said as he jotted down coordinates that came crackling over a radio from an observer closer to the conflict area.

“Hitting targets accurately can be difficult and we’re expending rounds without hitting targets. We are concerned about our own troops that are very close to the enemy area,” Baybayan added, as the mortars exploded in the city, sending up plumes of thick black smoke.

Tamboon, one of two snipers in his squad of nearly 20, was planning to get a vantage point against the terrorists when he was struck down by an enemy sniper, who apparently identified him as the leader.

Tamboon’s body arrived at the Naval Forces Western Mindanao Command on Sunday. After a hero’s welcome, he was taken to his house at a poor community in Sinunuc village.

Another Marine sniper, Cpl. Arshid Isirani, was killed by a sniper’s bullet in Madaya village in Marawi on June 18. His body arrived here the next day.

Chinaline, in an interview on Sunday, said she was still in denial that her husband was already gone.

“If he was not busy, he would call me every hour. He was like bringing me to his work and assuring me that he was OK,” she said.

“He told me that his assignment in Marawi was much better compared to Sulu,” she said.

In Marawi, she said, he could move around buildings looking for a firing position.

“He said that in Sulu, the only cover were trees and leaves. He said if he was able to survive Sulu, what more Marawi,” she said.

Tamboon last called her at 6 a.m. on Thursday.

“It was the usual call and the usual talk. He asked me about our children and my situation at home,” she said.

An hour later, her husband was dead.

“I lost a loving and a thoughtful husband. Before thinking of himself, he prioritized others. Before he left for Maguindanao in April, he made sure that our house was finished. He fixed our windows and painted our walls,” Chinaline said.

She called on President Duterte to finish the war in Marawi because “so many soldiers have sacrificed their lives there.”

“If there is a need to bomb that place, bomb it and end everything,” she said.

Isirani, 25, a member of the Special Operating Platoon of the Marine Battalion Landing Team 5, was immediately taken to his home in Sinunuc and buried in accordance with Islamic rites.

“He called me and told me to decorate the house and clean his room,” his mother, Laila, recalled her phone call with her son.

“He said he was coming home to take a long break after Ramadan, and that he was dying to get a long sleep. He said he was tired but his spirit was high. He sounded happy,” she added.

The soldier’s father, retired Navy Petty Officer 3 Jumah Isirani, said he also had a long phone conversation with his son.

“Every time he called, it was always a long talk. We were laughing all the time,” Jumah said.

“He told me. ‘Amah, we will finish this war, this won’t take long,’” the father quoted his son as saying. “I also want to take a rest. Prepare the house so I can get married.”

It was Isirani and brother Jalali, a member of the Philippine Navy’s Special Warfare Group, who recently secured a loan to fund, along with their father’s retirement money, the construction of their house.

“Now he is home to his unfinished house,” Laila said. “He is now sleeping in paradise.”

“Rest well, son, you fought a good fight. You gave honor and pride to the Marines,” Jumah said.