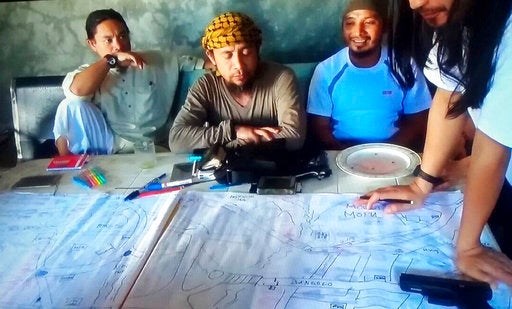 This image taken from undated video shows the purported leader of the Islamic State group Southeast Asia branch, Isnilon Hapilon, center, at a meeting of militants at an undisclosed location. (Photo via AP)

The leader of the militants who laid siege to a southern Philippine city is suspected to be hiding in a mosque there, the Philippines’ defense chief said Monday, days after Isnilon Hapilon was reported to have fled the bombed-out city.

“According to our latest info he is still inside Marawi,” Defense Secretary Delfin Lorenzana told a news conference in Manila. “There is information we got this morning that he is hiding in one of the mosques there in Marawi.”

He said government informants have been watching for Hapilon’s arrival in his stronghold of Basilan island but have not seen him there. Hapilon was not among three fighters from Marawi who arrived in Basilan a week ago, Lorenzana added.

The militants aligned with the Islamic State group attacked Marawi on May 23 and are confined in a small area but still putting up resistance to government forces who’ve retaken most of the city.

The violence has left at least 459 people dead including 39 civilians, 336 militants, and 84 soldiers and policemen. At least eight foreign fighters are believed to be among the dead, Lorenzana said.

Hapilon is the Islamic State group’s purported leader in Southeast Asia. The Filipino militant is on Washington’s list of most-wanted terrorists, with a $5 million bounty on his head. His whereabouts are the subject of intelligence reports the military continues to try to verify.

Lorenzana said displaced residents will be allowed to go back to cleared areas of the city, with the government assisting in the rebuilding of their homes, and to other areas as soon as the fighting stops. But he said some 1,500 homes still need to be cleared of explosives and soldiers are able to clear only 70 to 100 homes a day.

The rebuilding of the city’s business district may also take more time and funds because it has been badly damaged by government airstrikes on the attackers’ positions and the militant’s torching of buildings and houses.