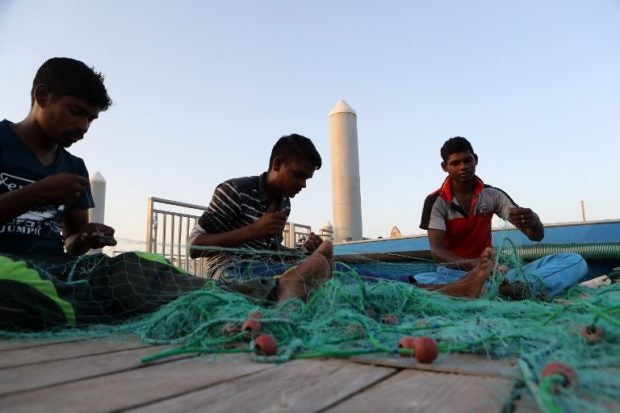 Fishermen fix a net on the corniche of the Qatari capital Doha on July 2, 2017. AFP PHOTO/STR

DOHA, Qatar—Qatar appeared defiant as Saudi Arabia and its allies Monday extended a deadline for Doha to accept a series of demands to lift a de facto blockade.

Their demands include Doha ending support for the Muslim Brotherhood, the closure of Al-Jazeera television, a downgrade of diplomatic ties with Iran and the shutdown of a Turkish military base in the emirate.

Saudi Arabia, the United Arab Emirates, Bahrain and Egypt gave Doha 10 days to comply with their 13 demands, with the ultimatum due to expire at the end of Sunday.

The 48-hour extension was in response to a request by the Kuwaiti emir, Sheikh Sabah al-Ahmad Al-Sabah, who is acting as mediator in the Gulf crisis.

“The list of demands is made to be rejected,” Sheikh Mohammed said Saturday.

“Everyone is aware that these demands are meant to infringe the sovereignty of the state of Qatar,” he said at a news conference in Rome.

“The state of Qatar… is rejecting it as a principle,” he said, adding: “We are willing to engage in providing the proper conditions for further dialogue.”

Saudi Arabia and its allies announced on June 5 they were severing ties with their Gulf neighbor, sparking the worst diplomatic crisis to hit the region in decades.

They accused Doha of supporting extremism and of being too close to regional arch-rival Iran, which Qatar has strongly denied.

The crisis has raised concerns of growing instability in the region, home to some of the world’s largest energy producers and several key Western allies hosting US military facilities.

German Foreign Minister Sigmar Gabriel, who on Monday starts a tour of several Arab states, called for a “serious dialogue” to end the crisis.

“We are worried that the distrust and the disunity could weaken all the parties concerned as well as the entire peninsula,” said Gabriel, who will visit Saudi Arabia, the United Arab Emirates and Qatar.

Riyadh and its supporters have already severed air, sea and ground links with Qatar, cutting off vital routes for imports including food.

Here are the key demands:

The Qatar-based Al-Jazeera news channel has long been a source of conflict between Doha and its neighbors, who accuse it of bias and fomenting unrest.

One of the world’s largest news organizations, it has been repeatedly banned.

Egypt accuses it of supporting the Muslim Brotherhood, which it blames for violence after the military ousted Islamist president Mohammed Morsi in 2013.

The United Nations said the demand to shut Al-Jazeera and “other affiliated media outlets” was “an unacceptable attack on the right to freedom of expression and opinion.”

The Arab countries also demand that Doha cut ties with groups including the Muslim Brotherhood, which Saudi Arabia and its allies blacklist as a “terrorist” organization.

They also called on Qatar to hand over opposition figures based in Doha.

Western governments have concerns about the Brotherhood but have not listed it as a foreign terrorist organization—nor has the UN.

Another key demand is the closure of a Turkish military base in Qatar set to give Turkey a new foothold in the Gulf.

Turkey sees Qatar as its top Gulf ally but is also keen to improve relations with regional heavyweight Saudi Arabia.

However, Turkey’s parliament approved a troop deployment to the Qatar base just two days after the crisis broke out.

Turkish President Recep Tayyip Erdogan has said the demands were “against international law.”

Sunni-ruled Saudi Arabia and Shiite-dominated Iran sit on opposing sides in conflicts in Syria and Yemen, where Qatar was part of an alliance fighting Iran-backed Huthi rebels until the crisis broke out.

Riyadh regularly accuses Tehran of interfering across the Middle East, linking it to instability in the kingdom’s east, where minority Shiites live.

But not all Riyadh’s Gulf neighbors share its hostility toward Iran.

Oman and Kuwait retain warm diplomatic ties with Tehran, while the UAE hosts a large Iranian expat population and has strong commercial ties with the Islamic Republic.

When Saudi Arabia closed the emirate’s only land border—vital for its food imports—Iran shipped in tons of fruits and vegetables.  /ra