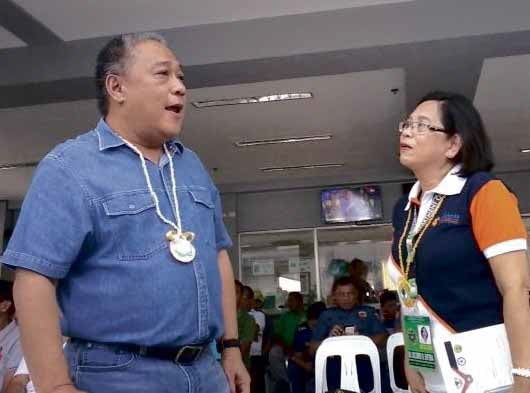 Cebu Gov. Hilario Davide III (left) is one of only two prominent officials of Cebu who had not taken their oaths as new members of PDP-Laban but had expressed full support for President Duterte. —BENJIE TALISIC/CEBU DAILYNEWS

The province of Cebu could serve as an example of how this saying holds true: In politics, there are no permanent friends or enemies, only permanent interests.

The political landscape of the province had changed colors from yellow to red months after President Rodrigo Duterte swept the 2016 presidential elections with a landslide victory.

As Mr. Duterte’s popularity soared, elected officials in Cebu lost no time moving to the President’s political party, Partido Demokratiko Pilipino-Lakas ng Bayan (PDP-Laban), which had been derided in the past as too small a group that all its members could fit into a Volkswagen Beetle.

It didn’t matter that months before, the officials had sworn allegiance to other parties.

While on paper they remained members of the Liberal Party (LP), Cebu City Mayor Tomas Osmeña and Gov. Hilario Davide III had expressed support for the Duterte administration.

During the 2016 presidential campaign, most officials of Cebu ran under LP, the party in power until June 30 when Mr. Duterte took over Malacañang.

Although only few Cebu officials backed Mr. Duterte, he won handily over Mar Roxas, who got overwhelming support from local officials.

Less than three months after the elections, more than 300 elected officials took their oaths of office as PDP-Laban members.

Among them were Mandaue City Mayor Luigi Quisumbing, his vice mayor, Carlo Fortuna, and all of the city’s councilors.

Rama had been barred from joining PDP-Laban after his name was mentioned on a list of alleged narcopoliticians.

Rama denied the allegation and had been seeking audience with President Duterte to clear his name but to no avail.

Original Duterte supporters in Cebu said his administration was unlike others because it was not seeking revenge on those who did not support Mr. Duterte.

“Look around us, barangay officials are even personally joining drug raids” regardless of their past political affiliations, Labella said.

“As I see things right now, this administration is fair to all,” said Philip Zafra, head of the Association of Barangay Councils in Cebu City, who was once a supporter of Rama.

“In the local level, no distinction is made between party mates and nonparty mates,” he said.