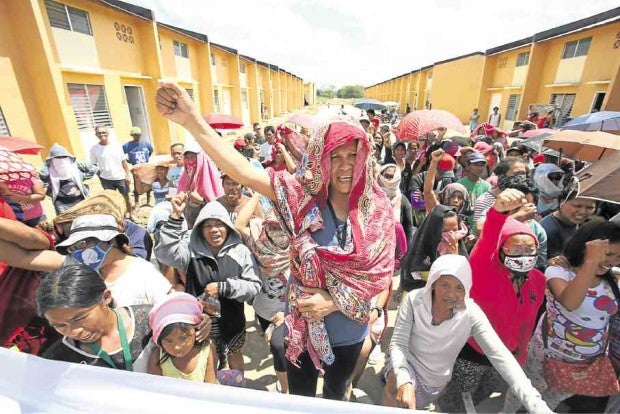 CITY OF MALOLOS — Families belonging to the Kalipunan ng Damayang Maralita (Kadamay) on Friday asked the Bulacan provincial government for help to get water and power services for the 5,000 low-cost houses that its members had occupied in March.

At least 1,000 Kadamay members trooped to the provincial capitol for a dialogue with Gov. Wilhelmino Sy-Alvarado.

Many of the houses occupied by Kadamay members were unfinished and had no water or electricity connections.

Roman Polintan, Central Luzon chair of the group Bagong Alyansang Makabayan (Bayan), said that Alvarado had formed a committee composed of agencies, like the National Housing Authority (NHA), to discuss the installation of utilities in the houses.

Friday was also the last day for the housing boards of the Armed Forces of the Philippines and the Philippine National Police to finalize the list of soldiers and policemen who are still interested in occupying 1,983 houses in Pandi Heights 1 in Barangay Cacarong Bata and Villa Louise in Barangay Siling Bata in Pandi that had been awarded to them by the NHA.

Many of the houses have not yet been turned over to the NHA by their contractors.

The 1,983 units awarded to soldiers and policemen were among 5,278 houses occupied by Kadamay families.

Elsie Trinidad, NHA spokesperson, said President Duterte had encouraged the soldiers and policemen to give up their units in favor of Kadamay.

Should the beneficiaries heed Mr. Duterte’s request, the NHA would request Congress to pass a law allowing the housing agency to reallocate the units. —Carmela Reyes-Estrope