Pacquiao urged to focus as senator instead after loss to Horn 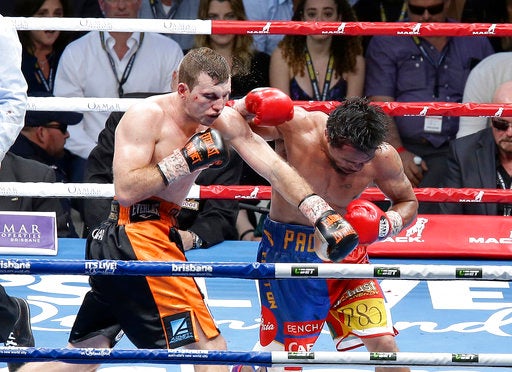 Jeff Horn of Australia, left, lands a left to Manny Pacquiao of the Philippines, right, during their WBO World Welterweight title fight in Brisbane, Australia, Sunday, July 2, 2017. Pacquiao lost his WBO welterweight world title to Horn in a stunning, unanimous points decision in a Sunday afternoon bout billed as the Battle of Brisbane in front of more than 50,000 people.(AP Photo/Tertius Pickard)

Zarate made the statement after Pacquiao’s loss to Jeff Horn in the so-called “Battle of Brisbane,” an upset loss that drew negative reactions on social media.

Pacquiao lost despite landing more jabs and punches against Horn during the bout.

“The Aussie boxer proved to be a worthy opponent that Sen. Manny had to go all-out throughout the match. Sen. Manny should now concentrate more on his work as a senator; now is the opportune time to pass on the torch to younger Filipino boxers,” Zarate said of his former colleague.

Before being elected senator, Pacquiao was Saranggani Representative and a perpetual absentee in the lower House.

Zarate said it’s time for younger boxers to fight in Pacquiao’s stead so that the latter could focus on his career as newly elected senator.

Besides being a senator and boxer, Pacquiao is also a Bible preacher and a basketball player.

Despite his loss, Pacquiao would continue to make his country proud, Zarate said.

“It is now time for the younger Filipino boxers to step up and make the Philippines proud. Down under, Sen. Manny may have lost the fight, but up here in his country, he is a winner still, especially if he champions and advocates the interest of the poor Filipinos for decent wages, genuine land reform, protection of the environment, among others,” Zarate said.

READ: If elected senator, Pacquiao vows to give up one of other careers

Senate President Koko Pimentel begged off from making a comment about the suggestion Pacquiao should focus instead on his Senate duties.

Pimentel said Pacquiao continues to be his “idol” and that any career decision is for Pacquiao to make.

“When he was at the peak of his boxing career and global popularity, he allowed me to be his friend. And I will be his friend and admirer up to the day I say goodbye to this world,” he added. JE