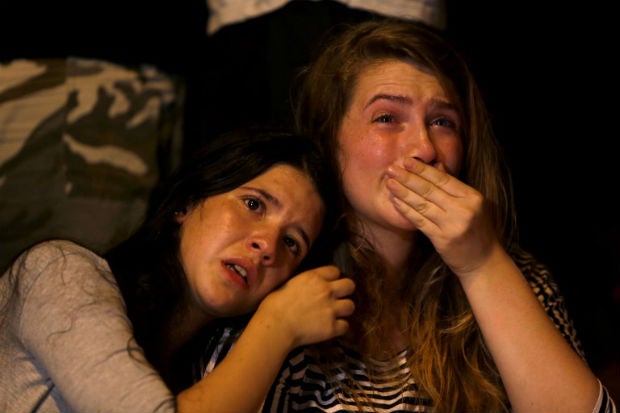 Israeli girls cry during a gathering of hundreds of friends, classmates, teachers, members of the gay community and supporters in downtown Jerusalem on August 2, 2015, to mourn the death of Israeli Shira Banki who was stabbed at the Jerusalem Gay Pride march. Shira Banki, 16, who died of her injuries, was among six people stabbed at the Jerusalem march on July 30, 2015 by a suspect identified as an ultra-Orthodox Jew released from prison only weeks earlier for a similar attack.   AFP

Organizers however vowed to press ahead with the Trans Pride March, planned for Sunday afternoon, despite the ban.

The Istanbul governor’s office said in a statement the march could not take place because the venue for the event—the central Taksim Square—was not suitable and because the office had not received a proper application for permission to hold the march.

“After an evaluation … it has been decided not to give permission for the holding of this event,” the office said in a statement.

City officials also urged citizens to ignore calls to participate in the parade and abide by the security forces’ warning./rga

But the organizers wrote on their Facebook page that “we don’t recognize bans… we will be at Taksim tomorrow for the Trans Pride.”

The Trans Pride march, if held, would have been the eighth edition of the event, which promotes rights for transsexuals in Turkey, but it has suffered crackdowns in recent years.

Similarly, the Gay Pride parade had been held annually in Istanbul until 2015—an event routinely attended by thousands of people before a police crackdown.

Last Sunday, police fired rubber bullets at a group of around 40 activists attempting to hold a gay pride march, an AFP journalist reported, and at least four people were detained.

Witnesses said there was a heavy police presence that outnumbered the activists.

The year before, organizers were denied permission to march with the city on the edge over bombings blamed on Islamic State group and Kurdish militants, sparking anger from gay rights activists. /ra