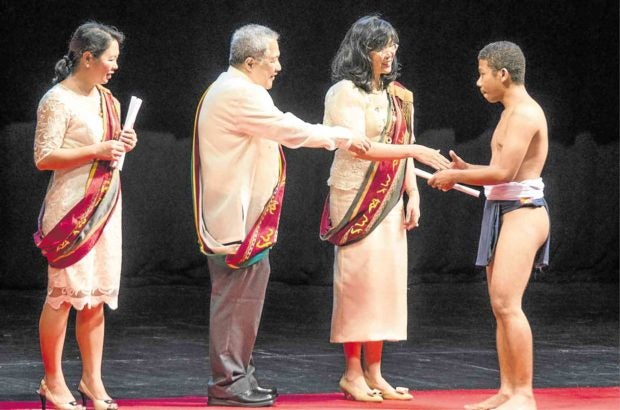 PROUD MOMENT Wearing a G-string, King receives his diploma at the UP graduation rites. —CONTRIBUTED PHOTO

CLARK FREEPORT — It’s not too difficult to find Norman King in Barangay Macapagal, a settlement put up by former first lady Imelda Marcos on a hill at the northern side of this former United States military base-turned-economic zone.

Pointing to the King family home, an “unat” (lowlander) running a tricycle repair shop nearby described King as “the ‘kulot’ (Aeta) who recently graduated from UP (the University of the Philippines).”

It’s a distinction that the Aeta community around Mt. Pinatubo wears with pride. No other Aeta has been known to have graduated from the state university before King, who obtained a Bachelor of Science degree in behavioral sciences at UP Manila last month.

King, 27, is as proud of his identity, describing himself as a “katutubong” (native) Aeta, in an interview at the family kitchen behind a small yard filled with metal boxes, rubber tires and wooden planks.

“I was not showing off. I just wanted to say that we Aetas are capable of being educated,” he explained. “It wasn’t only I who went up the stage. The Aeta community was with me.”

King, the eldest in a brood of seven, had to work his way through school.  His parents, Warlita and Roman, could not afford to send all their children to school at the same time on her earnings as a vegetable and fruit grower, and his salary as driver for the late Justice Eleazer de los Santos.

King was only a year old when Mt. Pinatubo erupted in 1991, forcing the Aetas of Inararo village to flee to the lowlands.

After finishing high school in Angeles City in 2004, King worked as a delivery boy for Gintong Sining Art Center in Makati City for P3,700 a month.

Using his savings, King studied to become a computer technician in 2005, and landed a job in 2008 at a business process outsourcing company that paid him P16,000 monthly.

“Money is a tool you put to good use. It should not use you,” he said.

But there are more important things in life than money, King and his father soon realized.  The two quit their jobs in 2010 to help assert the right of Aetas over a part of their “lutan tua” (ancestral domain) where a Korean had built a spring resort.  The resulting tension caused Roman, a former village chief, to go into hiding for his safety.

King said he imbibed from his father the awareness that he was an Aeta and that their existence was tied to their ownership and control of their land.

His grandfather, Miranda, had lived in a resettlement site near a forest about 10 kilometers from Inararo to protect the domain, King said.

In fact, he added, so great was the respect shown by early American commanders to his ancestors, the Aeta leaders, that they were given the name King.

In more recent times, poverty and their remote resettlement site have deprived most access to education and health services, something that they gained back with the explosion of Mt. Pinatubo.

Sadly, King said, some members of the tribe used their education to improve only themselves and their families.

“At times, I ask myself if it was worth defending the Aetas since some of us have already disregarded our culture,” King said.  “I end up asking myself, ‘Who would care for those who are struggling to defend our identity and culture?’” he added.

King said he planned to take up law to help Aetas defend themselves and their lands. His aunt, Wyda Cosme of Zambales, is the first law graduate among Aetas.

He has trust in God’s guidance, King said. Isagani Malaya, the name he uses on his Facebook account, reflects this positive outlook. “I want to be a leader of our people,” he said.