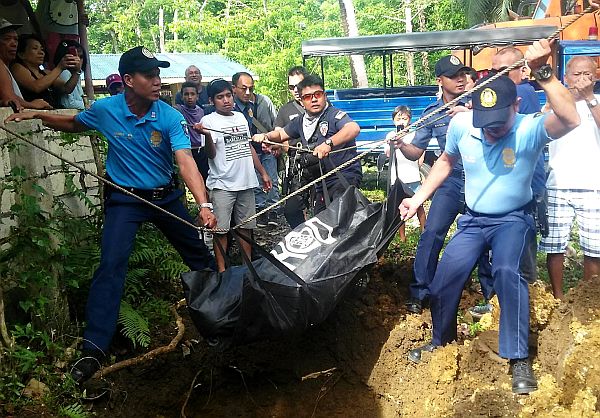 In this May 6, 2017 file photo, Bohol policemen bury the remains suspected Abu Sayyaf member Abu Saad (full name Saad Samad Kiram) after he was killed on May 5, 2017 in an escape attempt. (CDN FILE PHOTO)

ZAMBOANGA CITY – The military on Friday said soldiers had killed close to 100 Abu Sayyaf bandits during the first six months of the year alone.

Capt. Jo-Ann Petinglay,  spokesperson of the Western Mindanao Command, said the deaths were from clashes in Basilan, Sulu, Tawi-Tawi and parts of Zamboanga peninsula.

She said during the first two quarters of the year, soldiers had killed 94 bandits and arrested 66 suspects. The number of those who yielded had reached 98.

Among those who recently yielded were Serham Hasim Akkalun and Hapid Madjakin, both Basilan-based Abu Sayyaf members, who turned over an M1 Garand rifle and a magazine with four rounds of live ammunition.

Lt. Gen. General Carlito Galvez Jr., the Westmincom commander, said soldiers had not been complacent and continued to pursue the Abu Sayyaf.

“(We) continue to work hard and integrate the efforts of our soldiers and our stakeholders in sustaining the internal security in Mindanao and bringing about the defeat of the Abu Sayyaf,” Galvez said./rga