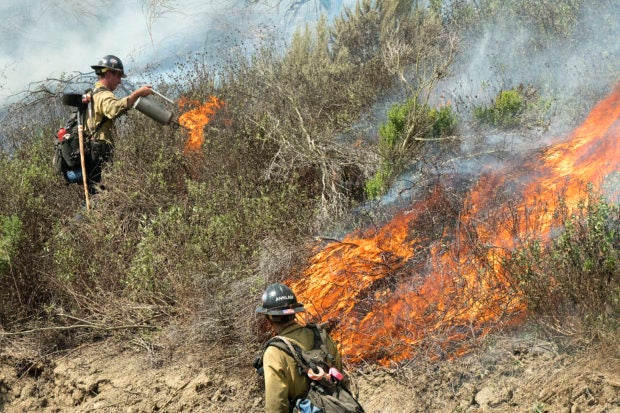 Firefighters set back fires as they work to put out a brushfire in San Clemente, California, Thursday, June 29, 2017. Firefighters on Thursday were also battling wildfires in New Mexico, Utah, Washington state, as well as California. (Ken Steinhardt/The Orange County Register via AP)

About 1,400 evacuated residents of the community of Mayer were allowed to go home earlier in the day and Yavapai County Sheriff Scott Mascher estimated 2,000 other residents of other small communities remained out of their homes.

Campgrounds were also emptied and 1,400 children attending summer camps were bused out as the fire approached.

The fire, which has now burned about 45 square miles (116 sq. kilometers), was one of the top firefighting priorities in the U.S. after it rapidly grew while burning through a dense, rugged forest.

More than 800 firefighters were battling the blaze burning in the communities around Prescott, which draws a mix of desert dwellers escaping the heat, retirees and visitors to its famed Old West-themed Whiskey Row lined with bars.

The flames crossed a road a day earlier and approached the town of Dewey-Humboldt, but officials said firefighters saved the community from devastation.

“When that fire jumped that road and started heading to Dewey-Humboldt, we thought it was gone,” Mascher said. “I thought there was no stopping it.”

Authorities estimated that the fire burned a handful of homes, but did not have an exact count.

The blaze also forced evacuations for children and campers in a cooler part of Arizona that many head to in the summer to escape the stifling heat.

About 1,400 children had to leave summer camps run by churches and the YMCA among others where children swim, ride horses and participate in outdoor games and activities. Several campgrounds — normally popular sites for the July Fourth weekend — were also forced to close.

Authorities used school buses to transport children from the camps to the small mountain city of Prescott, where they re-connected with their parents, said Yavapai County Supervisor Tom Thurman. No camps burned, but county officials did not want to take risks.

“For the kids, we’re just being proactive,” Thurman said.

After spending two nights in a shelter for people evacuated from the fire, Tracey McCabe was looking forward Thursday to sleeping in her own bed after authorities lifted some evacuation orders and said improving weather conditions were helping them fight the fire.

McCabe was among several hundred residents in the town of Mayer, population 1,400, allowed to go home after fire officials determined their homes were no longer at risk from the fire that started Saturday. The cause was not known Thursday.

McCabe worried that her house might have had an orange tag placed on it by authorities to mark residents evacuated safely away from the fire zone.

“That means you’re not there. It’s an open invitation to thieves,” she said.

The Arizona blaze grew slightly overnight but fire officials said lower wind speeds would make it easier for firefighters to try to quell it.

Higher humidity also helped firefighters on Wednesday despite a temporary halt to aircraft operations because of an unauthorized drone flying in the area. Several helicopters and fire crews had to stop working for about 45 minutes to an hour because the drone posed a serious safety hazard. Authorities did not find the pilot.

In the town of Dewey-Humboldt, David Eastlack, his girlfriend and their three daughters woke up Wednesday to find ash falling “like snowflakes” and a warning from authorities to prepare for a possible evacuation.

Eastlack was working at a warehouse later that morning when officials arrived and told workers to go home, get their families and leave the town of about 4,000.

He raced home, loaded the family SUV with clothes and family pictures and headed for the evacuation center at a high school in the next town up the highway.

“We left everything else,” Eastlack said. “If it got destroyed in the fire, it’s just stuff. But we took the memories.”

Ducey, Arizona’s governor, noted that Friday marks the four-year anniversary of a wildfire that killed 19 elite firefighters in Yarnell, about 45 miles (72 kilometers) southwest of Prescott Valley.

He praised “the elite status of those young men that we lost. And I wanna take that same type of spirit out as we fight this fire over the Fourth of July holiday weekend.”

Elsewhere, hundreds of people forced from their homes by a Utah wildfire were expected to return even as the blaze grew.

Fire managers said Thursday at 25-mph (40-kph) wind gusts expanded the wildfire near the ski resort town of Brian Head to more than 91 square miles (236 square kilometers), though firefighters boosted its containment to 15 percent. The fire was ignited by someone using a weed-burning torch.

In Southern California, a wildfire burning on the Camp Pendleton Marine Corps base and in the city of San Clemente was about 10 percent contained. Officials there say higher humidity levels slowed the fire’s pace.

Fires that flared dangerously close to homes in the Hollywood Hills neighborhood of Los Angeles and in the city of Burbank were knocked down. JPV/rga