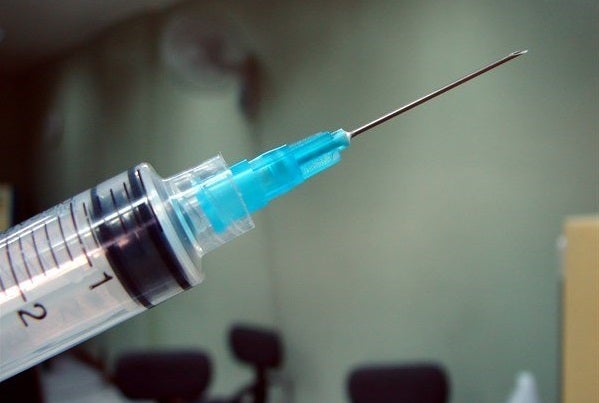 A woman in New Hampshire reportedly had herself injected with heroin and amphetamines for her to cope with the pain of labor. INQUIRER FILE

NEW HAMPSHIRE, United States — A New Hampshire woman who injected heroin and methamphetamines into a friend about to give birth has been sentenced to a year in jail.

Thirty-eight-year-old Rhianna Frenette, of Belmont, pleaded guilty to reckless conduct Tuesday for injecting Felicia Farruggia with the drugs soon after she went into labor in September. Prosecutors said Farruggia’s boyfriend said that she insisted on her “fix of heroin” before she would go to the hospital.

Firefighters arrived after Farruggia’s boyfriend called 911 and the baby was born in the driveway. The 29-year-old Farruggia, of Concord, whose son is now in state custody, pleaded guilty last week to reckless conduct and was sentenced to a year in jail.

According to the affidavit, Farruggia said she started having contractions, went to the bathroom and lay on the floor. She asked Frenette to come in, as she was screaming and crying and said, “I can’t do this,” referring to the labor pain. She said Frenette had heroin and told her “it would take the edge off.” She said she didn’t stop Frenette from injecting her.

But Frenette told police that when she went into the bathroom, she saw Farruggia trying to inject herself, essentially “mutilating herself with the needle,” which broke. Frenette said she took a used needle provided by someone else and “shot out probably more than half” of the substance inside it before injecting the rest into Farruggia. She said the ambulance was called after that.

“This case was important because a newborn baby was a collateral victim of their drug addiction,” Deputy County Attorney Catherine J. Ruffle said.

Frenette’s attorney, Emma Sisti, said her client made a bad choice, but was trying to do what she thought was best at the time.

“People who are in an addictive crisis have a different mindset as to what to do,” Sisti said.

Sisti is hopeful that the frantic night in September and the subsequent fallout might be enough for Frenette to get her life back on track, after nearly two decades of struggling with drug addiction. Sisti said the fact that she will be allowed to take part in a substance abuse program while in prison should help.

“For a long time, the criminal justice system was focused on dealing with the charge rather than the underlying cause of the criminal behavior,” Sisti said. “We are starting to see that shift where judges and prosecutors, houses of corrections, probation officers are focusing on making sure that a person doesn’t come back — not by punishing them but by giving them resources to be successful in the future.” CBB