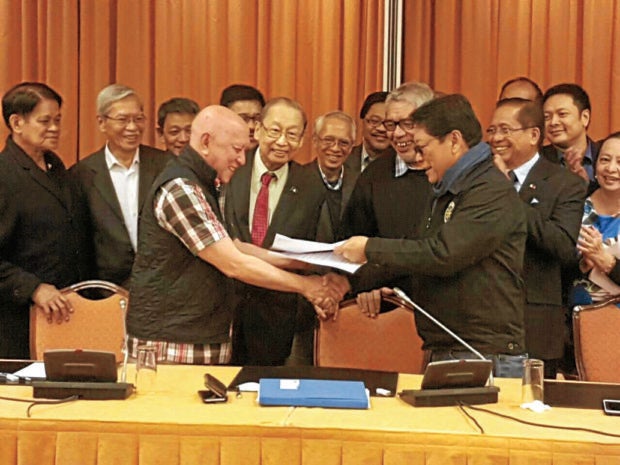 In trying to find peace for the country, President Rodrigo Duterte has likely discovered over the past 12 months that there is a world of difference between being head of state and being city mayor.

Dennis Quilala, a University of the Philippines professor, said Mr. Duterte must have realized that dealing with communist rebels and Moro separatist groups was more complex on the national stage than at the local level.

“I think the President has learned that the way he handled these groups in Davao City is quite different from handling them at the national level,” Quilala, who specializes in peace and conflict studies, told the Inquirer.

Peace talks are where conflict is resolved — not with bullets but with words and nuances.

The NDFP is the political arm of the Communist Party of the Philippines, which has waged an armed rebellion for about five decades.

The government, under several administrations, and the Moro secessionist groups have made substantial gains toward peace, albeit through a painstakingly long process.

Establishing lasting peace was among Mr. Duterte’s campaign promises. He formalized it into policy in his first State of the Nation Address (Sona) and in his administration’s National Security Policy.

As President-elect, Mr. Duterte wasted no time in dispatching his men to the Netherlands to meet with their counterparts in the NDFP, including its chief political consultant, Jose Maria Sison, and its then chief negotiator, Luis Jalandoni.

The first round of talks in Oslo, Norway, in August last year started on a high note. Communist leaders Benito and Wilma Tiamzon were released on bail and joined the negotiations.

Both panels were upbeat discussing the Comprehensive Agreement on Social and Economic Reforms (Caser), which is expected to bring, among other things, social justice that has been argued as the root cause of the communist insurgency.

But the two sides again reached an impasse. Angered by the alleged attacks on the military by the communist-led New People’s Army, Mr. Duterte ordered the suspension of the fifth round of talks in May.

He had done the same in February — for the fourth round of talks for the same reason.

“I can say with full confidence that both parties want to continue talking,” he said in a forum organized by Kapayapaan Campaign for a Just and Lasting Peace that was aired on Facebook Live on June 21.

But the President’s declaration of martial law in Mindanao and his threat to expand it nationwide if Islamic State(IS-inspired terrorists spill over to Luzon and the Visayas “could harm the peace negotiations,” Sison said.

“The [government] must recognize that … until there is a real cessation of its all-out war offensive in any guise or unless there is an actual, effective and principled reciprocal or bilateral ceasefire in place, armed encounters will continue,” said the NDFP legal adviser, Edre Olalia.

Amid the battles between IS-inspired groups and the military in Marawi City, the Bangsamoro Transition Commission (BTC) signed on June 16 the new proposed Bangsamoro Basic Law (BBL), the required legislation for the creation of a Bangsamoro autonomous region in Mindanao. 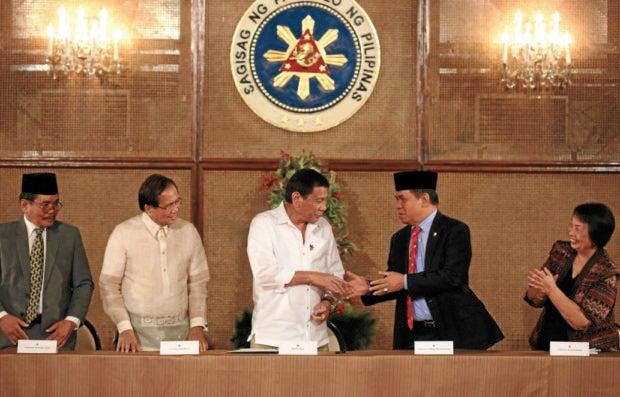 Mr. Duterte followed through with the peace process with the Moro Islamic Liberation Front, led by its chair, Murad Ebrahim, through a new Bangsamoro Basic Law proposal to create a Bangsamoro autonomous region in Mindanao. —INQUIRER PHOTOS

But the encounters in Mamasapano, Maguindanao province, in January 2015, in which 44 police commandos were killed while on a mission to get a Malaysian terrorist, derailed efforts to pass this legislation.

In his Sona, Mr. Duterte acknowledged the historical injustices suffered by the Moro people.

“We discussed only about 30 percent of [the old draft] … which we strengthened,” he told the Inquirer.

Iqbal also said that the 1996 Final Peace Agreement between the government and the MNLF was “clear” in the new BBL draft, with two provisions from the MNLF peace agreement figuring prominently in the draft.

But there is another BBL draft being awaited: that from the faction of MNLF founding chair Nur Misuari.

Ferrer noted, however, the confusion in the direction that the government wanted to take when it came to resolving the Moro problem because of how it dealt with the different factions.

“The discussions with Misuari have yet to be clearly defined. There is a different (peace) table for him. But he (Misuari) changes positions and his demands are becoming more impossible,” she said.

Ferrer said it would depend on what the President would say in his second Sona.

But weeks after the new draft of the BBL was signed by the BTC, the draft has yet to be submitted to Mr. Duterte because of glitches in schedules.

The submission scheduled for today (June 28) in Malacañang was postponed because of the supposed unavailability of Senate President Aquilino Pimentel III and Speaker Pantaleon Alvarez III.

The patient Iqbal is trying to be more patient.

“We are concerned about the delay in the submission because of the impression it might create with the civilians. Because this was said to be a priority of the President,” Iqbal said.

He warned that frustration might grow if the government failed to pass the BBL. He said the longer it would take to approve the measure, the more difficult it would be for peace advocates and negotiators like himself to make themselves and the peace process relevant.

The normalization component of the Comprehensive Agreement on the Bangsamoro (CAB) has stalled because of the nonpassage of the BBL. The CAB provides for a give-and-take mechanism, so to speak.

The group will decommission 30 percent of its forces and firearms upon the ratification of the BBL; another 35 percent when the Bangsamoro police is operationalized; and the last phase takes place two months before the exit agreement is signed.

As the administration deals with the fragile peace processes, it also now has to deal with a new and likely more lethal threat to national security — IS-inspired groups.

Mr. Duterte now finds himself on the spot, Sison said at the Kapayapaan forum.

Sison said Mr. Duterte had to prove that he was the socialist, antioligarch and anti-US imperialist President that he portrayed himself to the people.

Both Sison and Iqbal pointed out the President’s tendency to flip-flop on his statements.

“The peace talks could benefit from a more consistent President and a more predictable security environment,” Quilala said.

He said it “would be easier for everyone if [the [President’s] statements are tempered by the peace strategy rather than influenced by the issue of the day.”