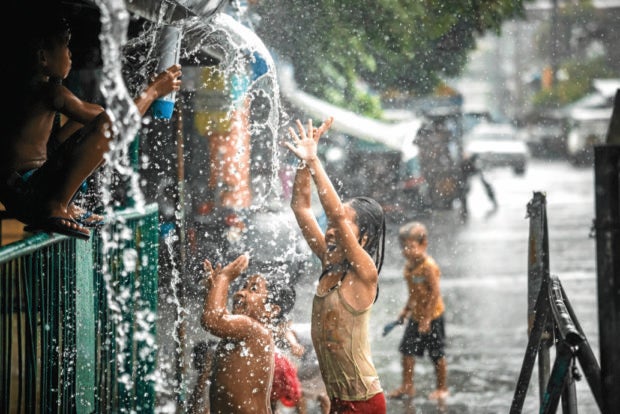 Children enjoys the heavy downpour of rain in a nearby public school in Tondo, Manila. INQUIRER PHOTO / JILSON SECKLER TIU

The state weather bureau predicts rainshowers and thunderstorms over parts of Luzon and Visayas on Wednesday due to the effects of the “monsoon trough” over southern Luzon.

In his report on the weather forecast for the next 24 hours issued at 5 p.m. on Tuesday, the Philippine Atmospheric, Geophysical and Astronomical Services Administration (Pagasa) forecaster Benison Estareja said the “prevailing weather system” was that of the monsoon trough, as no low pressure area or tropical cyclone has been spotted in the Philippine area of responsibility.

Estareja traces the trough to the Intertropical Convergence Zone, although he noted that it was not the ITCZ which was directly affecting the country.

Pagasa forecasts cloudy skies with light to moderate rainshowers and thunderstorms over the Bicol region, Calabarzon, Mimaropa, eastern Visayas, western Visayas and the province of Aurora.

Partly cloudy to cloudy skies with isolated rainshowers or thunderstorms are also expected over Metro Manila and the rest of the country, Pagasa said.