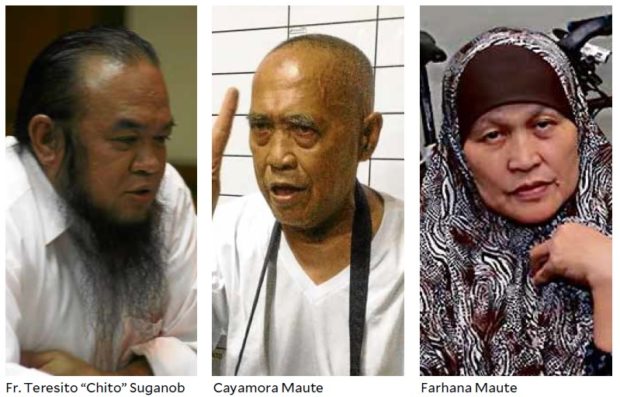 MARAWI CITY — A leader of Islamic State (IS)-inspired terrorists holed up in Marawi City is willing to release a Catholic priest that his group is holding captive in exchange for the freedom of his parents and relatives captured by the military, an Inquirer source said on Monday.

The source, who asked not to be named, said the gunmen from the Maute group and their allies from the Abu Sayyaf bandit group were unwilling to negotiate with the government.

Eight Muslim leaders entered the conflict zone in the heart of Marawi alongside rescue teams during the ceasefire to talk with Abdullah Maute, one of two brothers leading the Maute terror group that, together with its Abu Sayyaf allies who had pledged allegiance to IS, stormed the city on May 23.

The seizure of Marawi has caused the biggest internal security crisis in decades for the Philippines, and a realization that the long-feared arrival of IS could be a reality.

Images of black-clad fighters and IS flags flying in Marawi has caused alarm in the mainly Roman Catholic nation, and the protracted occupation and presence of foreign fighters suggest that the terrorists may have bigger designs on the southern Philippines than previously imagined.

The daily airstrikes were halted on Sunday to allow residents of predominantly Muslim Marawi to celebrate the end of the holy fasting month of Ramadan, but small skirmishes took place as terrorist snipers fired intermittently on positions held by government troops.

Rescuers who entered the conflict zone with the emissaries managed to pluck out six civilians, according to presidential spokesperson Ernesto Abella, who said on Monday that the “humanitarian pause” in the fighting was “generally peaceful.”

Abella said the body of a civilian killed by the terrorists was also recovered.

“We don’t want our actions to be misinterpreted, so we want that all actions should have the [government’s] go-signal and agreed upon by both parties,” Al Haq told the Inquirer by phone.

Assistant Secretary for the Peace Process Dickson Hermoso said the Maute group released some women and children on Sunday and the emissaries had come under fire briefly from terrorist snipers.

“We have only established a foothold with the Maute,” he said. “We hope both sides will again grant us the respite.”

The Inquirer source said the emissaries were granted access to Abdullah Maute only because they were also Maranao.

The source said Maute’s brother Omarkhayam was not around during the meeting.

“Abdullah was asked about his brother but he did not say anything,” the source said.

The military said earlier that it was verifying reports that Omarkhayam had been killed in the fighting.

The source said Maute told the emissaries that Fr. Teresito “Chito” Suganob, vicar general of Marawi whom the terrorists seized together with about 200 civilians as they attacked the city on May 23, was alive.

Maute, the source said, was willing to release Suganob but only if the authorities would free his parents and relatives.

On June 9, Ominta “Farhana” Maute, mother of the Maute brothers, was arrested by the police in Masiu, Lanao del Sur province.

Two days earlier, the Mautes’ father, Cayamora, and his second wife were arrested at a police-military checkpoint in Davao City.

On June 18, Farida and Al Jadid Romato, cousins of the Mautes, and Abdul Rahman Dimacula, boyfriend of Farida, were arrested in the port of Iloilo City.

Hermoso confirmed that the emissaries, among whom were Muslim religious leaders, were able to talk to the terrorists, but he declined to say what was discussed with Abdullah Maute.

The military on Monday said the resistance from the terrorists continued to diminish as the fighting entered its fifth week.

Fighting not ending yet

But Lt. Col. Jo-Ar Herrera, spokesperson for the military’s 1st Infantry Division, said the fighting was not ending yet, as the terrorists still held some parts of the city.

The diminishing resistance from the terrorists came after reports that Isnilon Hapilon, the Abu Sayyaf leader who pledged allegiance to IS, had fled Marawi.

“We were told by those rescued that Isnilon Hapilon has abandoned his companions. This is subject to [our] validation process,” Col. Edgard Arevalo, chief of the military’s public affairs office, said on Monday.

Arevalo said the military would track down Hapilon and find out if it was true that the bandit leader had “deserted” his companions.

He said civilians recently rescued from the conflict zone told the authorities that they did not see Hapilon in the areas where they had been held.

“They have not been hearing him or about him in the past few days,” he said.

After five weeks of fighting, the terrorists now appear to be lacking direction, he said, quoting the released civilians.

Abdullah and Maddie Maute are still alive, he said, noting that the emissaries met the brothers on Sunday.

He said the military was verifying reports that some hostages were beheaded and that fighters who wanted to surrender were executed. —With reports from Nikko Dizon and Philip C. Tubeza in Manila and the wires