Marawi: From minarets to tents 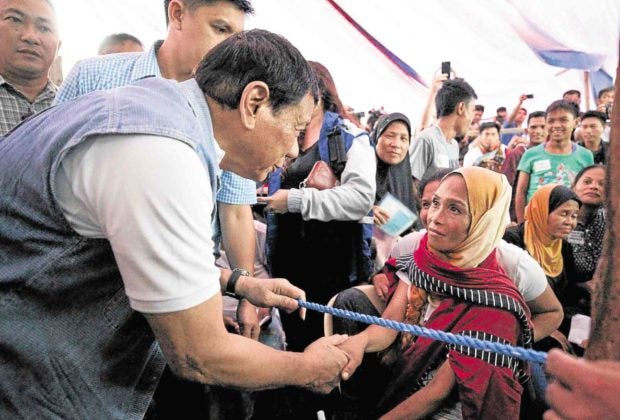 President Duterte visits evacuees inside a tent at Iligan City National School of Fisheries, which was used for the President’s interaction with the Marawi City residents. —MALACAÑANG PHOTO

COTABATO CITY—The landscape of Marawi would dramatically change from one marked by minarets to a city rising from the rubble in tents as soon as government forces finish off the last member of a homegrown terror group that sought to turn the predominantly Muslim city into an Islamic State (IS) vassal.

Public Works Undersecretary Emil Sadain said the establishment of a tent city for at least 40,000 displaced families would start as soon as fighting stopped, which would mean there were no more terrorists in the city.

The Office of the President, according to Sadain, has formed an oversight committee to focus on a reconstruction program for Marawi which will be led by the national government.

Sadain was here on Thursday to deliver P4.7 million in aid from the Department of Public Works and Highways (DPWH) to displaced residents.

The DPWH, according to Sadain, would be the lead enforcer of President Duterte’s commitment to rebuild Marawi from the ruins through a face-lift of the city.

The work would require clearing operations and studies on the extent of damage wrought by government air and ground assaults on hideouts of Maute group, a homegrown terror organization claiming to be an IS follower.

On how the planned tent city would look like and exactly where in Marawi it would be built, Sadain said these would depend on the Evasco committee’s approval of plans and designs.

Sadain was former public works secretary of the Autonomous Region in Muslim Mindanao (ARMM) before assuming his new post as head of the DPWH unified project management office.

“We are just waiting for the committee’s directive on when to start,” Sadain said.

He said he had been tasked by his boss, Public Works Secretary Mark Villar, with personally coordinating with the ARMM’s Humanitarian Emergency Action Response Team (HEART) for the DPWH’s relief distribution effort.

Fighting in Marawi, which started on May 23, led to massive evacuations that prompted the DPWH central office to raise money from its regional offices to be used on relief goods for distribution to displaced residents.

Sadain said the department had served at least 5,000 evacuees, including Marawi government employees and soldiers.
On June 22, five trucks from the DPWH loaded with relief supplies had been sent to this city from Lanao del Sur province.

ARMM Executive Secretary Laisa Masuhud Alamia, who also heads the ARMM-HEART relief mission, called on more evacuees to report to local government units for authentication of their identities before proceeding to the Department of Social Welfare and Development for aid.

Earlier, leaders of an interfaith group pleaded for help in the rehabilitation of Marawi.

The Bishops-Ulama Conference (BUC), in a statement on Tuesday, had expressed solidarity with families and communities suffering from the Marawi war.

BUC was created in late 1990s to initiate dialogue between Muslims and Christians. —WITH A REPORT FROM JIGGER JERUSALEM