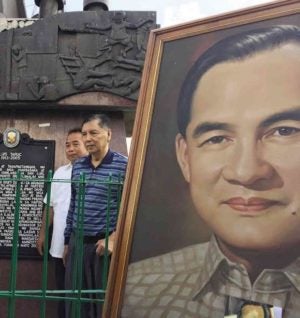 SAN LUIS, PAMPANGA—Luis Taruc was hunted like a criminal as he led a peasant army against the invading Imperial Japanese Army during World War II, was ousted as a legislator, jailed for almost 20 years and maligned by younger communists and socialists.

On Tuesday, however, on Taruc’s 104th birth anniversary, the National Historical Commission of the Philippines (NCHP) recognized his role in the pursuit of freedom and in the agrarian reform struggle.

Badoy, Mayor Venancio Macapagal and Taruc’s only son, Romeo, unveiled a marker installed by the NHCP at the park to honor one of the founders of Hukbo ng Bayan Laban sa Hapon (Hukbalahap).

NHCP regarded Taruc as a “nationalist and defender of the rights of farmers and workers.”

Born to a poor family in this town, Taruc’s membership in Aguman deng Maldang Talapagobra (Association of Workers) and Socialist Party of the Philippines (SPP), both founded by Kapampangan intellectual Pedro Abad Santos, deepened his understanding of social injustice.

He was jailed in 1937 and 1941 for joining labor strikes in Pampanga province. After the capture of leaders of the Communist Party of the Philippines and the SPP, Taruc and other leaders organized Hukbalahap in Mt. Arayat in Pampanga on March 29, 1942.

The Hukbalahap had already freed many areas in Luzon and the Visayas from Japanese occupation before American forces liberated Manila.

Elected as representative of Pampanga’s second district, Taruc and other members of the Democratic Alliance were expelled from Congress in 1946 for opposing the Bell Trade Act that gave the United States more control over the economy and natural resources of the Philippines.