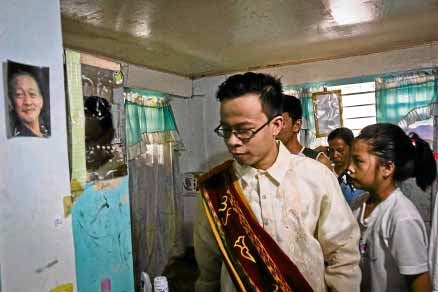 GRADUATION SPEAKER While mourning the death of his father, Arnel Villancio Jr. gets ready to attend and speak during the graduation ceremony at the University of the Philippines Los Baños in Laguna province. —CHRIS QUINTANA/CONTRIBUTOR

His father did not get to know that he would attain the highest honors among 2,454 graduates, which also included his older sister Mara. He was the only one who garnered the title this year with his general weighted average of 1.1762.

In his valedictory address on the university’s 45th commencement exercises, he emphasized the role that agriculturists played in the country.

“I do not believe that agriculturists are the ones who feed the world because that noble responsibility rests on the farmers.

“The responsibility of agriculturists is to continuously find ways for the world to feed itself. In the midst of challenges that could weaken agriculture, the agriculturists are one with the farmers to ensure that the world will not go hungry,” Villancio said.

On the day Villancio learned that he was graduating at the top of his class, his 50-year-old father was taken to the hospital. The following day, Villancio received a call from his sister that his father had died.

Villancio, the second of six siblings, said his father had urged him to attend UP Rural High School in Bay town.

The school, which has an agriculture-focused curriculum, sparked his interest in the field, he said.

Villancio’s family is not that well off, he said. Sometimes he would ask money from his older sister when his allowance ran out, he said. Many times, he only had buns from a local bakery for dinner.

When Villancio got into UPLB, he was not set on attaining the highest honors. “I just applied what one of my professors told me—not to study hard but to study well,” he said.

“I have one batchmate from whom I still owe a five-digit debt. If not for that person, I would not have been able to enroll during one semester,” Villancio said.

“Those are the times you realize that the true blessings from the Lord to you are not your capabilities, but the people around you.”

Through all of this, Villancio’s mother, Gina, 48, a housewife, was his rock.

“She always tells us to be strong even if we are going through a lot,” he said. “She is the one who provides the most guidance.”

Read Next
UP summa grad from Marawi echoes call for peace
EDITORS' PICK
ING Pay is the safe and reliable way to pay – here’s why
TECNO Mobile sparks up summer with fun livestreams, great prizes
PGH seeks more plasma donors as it loses 5 patients to COVID-19 daily
House-to-house COVID-19 testing pressed to get ‘true’ PH state
WATCH: INQside Look on the upcoming 2022 polls with Comelec spokesperson James Jimenez
Smart is fastest 5G Network in PH – Ookla
MOST READ
PH military pouring naval, air assets near site of Chinese incursions in WPS
US adds 116 countries to its ‘Do Not Travel’ advisory list
PH-Canada labor agreement coming soon – DOLE
Ganging up on a good thing
Don't miss out on the latest news and information.