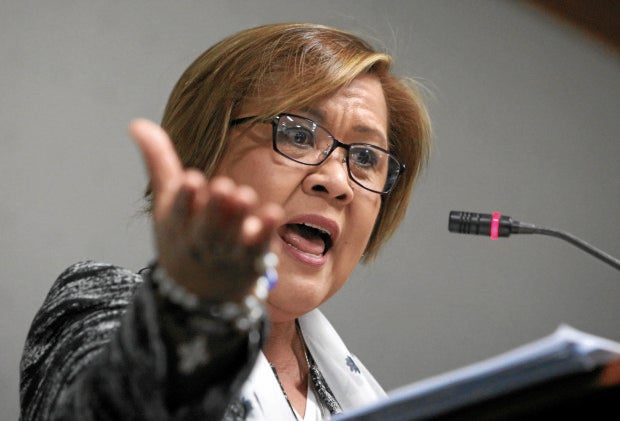 MANILA — Sen. Leila de Lima has vowed to contest the latest arrest warrant issued against her in connection with a case which she described as the “weakest among the three trumped-up drug charges” against her.

De Lima was reacting to the June 21 arrest warrant issued by a Muntinlupa court over allegations she abetted narcotics trading at the New Bilibid Prison when she was justice secretary.

De Lima said her lawyers would file a motion for reconsideration before the Muntinlupa Regional Trial Court Branch 205 due to the absence of probable cause.  She called the latest criminal charge against her “extremely weak.”

“(I)t’s the weakest among the three trumped-up drug charges, especially after the person the government has identified as my link to the commission of the offense charged, my co-accused in this particular case, already executed a statement denying my involvement,” she said in a statement.

The senator was referring to Jose Adrian Dera, alias Jad Dera, whom prosecutors alleged was her nephew and aide.

Saying she did not know Dera at all, De Lima noted that Dera had already denied any relationship or connection with her.

De Lima was accused by the DOJ of conspiring with Dera in demanding, soliciting and extorting money and vehicles from inmate Peter Co.

De Lima expressed her continuing faith in the judiciary and added she was “optimistic that the handling judges will more and more realize the unreliability of the witnesses against me, as well as the [incredulity] of their stories.”

“All of these so-called witnesses will be proven to have been lying all along, or have simply been threatened to falsely testify against me,” she insisted.

All three charges against her are being heard by three branches of the Muntinlupa regional trial court, one of which ordered her arrest and detention.  SFM