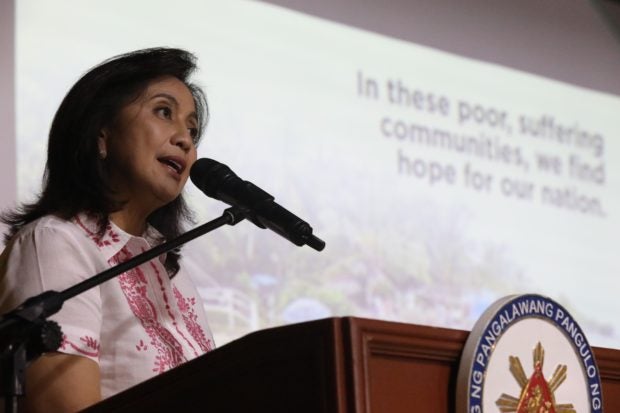 MANILA — Vice-President Leni Robredo plans to visit the besieged Marawi City this Monday (June 26), but even she is still unsure if she will be allowed to enter.

Robredo wanted to check that “life goes on” and schooling has not been disrupted for evacuees displaced by the month-long conflict, she said during the Sunday episode of her radio program “BISErbisyong Leni” aired on RMN-dzXL 558 kHz.

“Gusto natin kung puwedeng ma-normalize kahit iyong pag-aaral nila kaya aasikasuhin po natin iyan bukas (We want to normalize even just the schooling, so we will take care of that tomorrow),” she said.

However, strict regulations have been put in place amid continued fighting that even led to an Australian journalist being hit by a stray bullet.

“Hindi po natin alam kung papayagan tayong makapasok sa Marawi pero kung hindi po doon lang tayo sa karatig—sa Iligan, sa mga katabing lugar. Para maasikaso po natin iyong mga dapat asikasuhin (We do not know if we will be allowed to enter Marawi, but if not, we will just go to nearby areas—Iligan, adjacent places. So, we can take care of what needs to be taken care of),” Robredo said in Filipino.

She said her office used to be allowed to visit the Lanao del Sur provincial capitol in Marawi City and the Marawi city hall and hold inspections for “temporary learning centers.”

“Pero dahil po doon sa nangyari na may foreign media na na-sniper, parang nagbago ulit. Nagbago po ulit, hindi ulit pinapayagan na makapasok ng Marawi (But, because of what happened to the foreign media who was hit by a bullet from a sniper, things changed. They do not allow those who want to enter Marawi again),” she said.

Robredo’s planned visit to the so-called Islamic City coincides with the national holiday of Eid al-Fitr, which marks the end of the month of Ramadan. She already visited wounded soldiers in nearby Iligan City in late May, within a week of the conflict’s start on May 23. President Rodrigo Duterte had likewise visited the wounded soldiers and the evacuees, but has not yet been to Marawi either.

Robredo recently went through the usual bashing in social media last week after a few noted pro-Duterte personalities took issue with her recent visit to the United States to attend a gala event and help her daughter settle into Harvard University. This was amid the ongoing conflict in Marawi and Mr. Duterte’s recent days-long absence from the public eye.

In her radio show, she clarified that she was able to take time for the Filipino-American Symphony Orchestra’s invite-only fund-raising activity in Los Angeles since she would be helping her daughter Aika in Boston.

“Nakiusap ako sabi ko baka puwedeng June gawin ngayong taon kasi noong panahon na inimbita ako iyong anak ko nag-a-apply na. Sabi ko lang baka sakaling makapasok, puwede ko nang isabay (I asked if we can do it in June this year, because back when I was invited, my daughter was already applying. I said, maybe she can get in, I can do them in one go),” she said.

Robredo also said that while in the United States, she met with nonprofit United Way for a possible partnership with the Office of the Vice-President’s Angat Buhay anti-poverty program.

One pro-Duterte personality criticized Robredo for  attending to her 29-year-old daughter’s needs, but the Vice-President said: “Kahit matanda na ang mga anak natin, hindi naman nahihinto yung ating pagiging magulang (Even if our children grow up, we do not stop being their parents).”  SFM