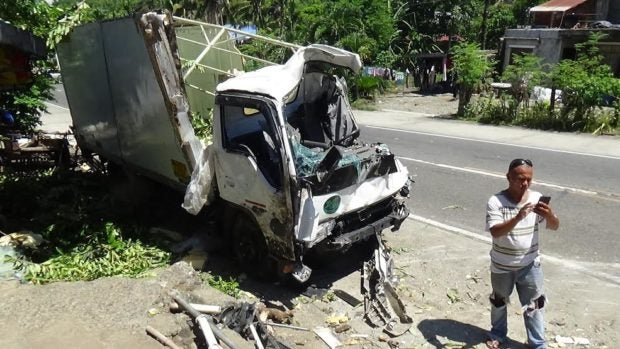 Driver Antonio Torres dies in this van after he lost control of the vehicle and it crashed into a fence, a concrete house and an electric post in the City of Ilagan in Isabela on June 25, 2017. (PHOTO BY VILLAMOR VISAYA JR. INQUIRER NORTHERN LUZON)

CITY OF ILAGAN — A 28-year-old man died while his assistant was hurt when their closed van loaded with unprocessed hog meat crashed into a house on Sunday dawn (June 25) here.

Killed was Antonio Torres, 28, driver of the van owned by a private meat processing company.

He was delivering 28 butchered pigs to Tuguegarao City when he lost control of the steering wheel and crashed the van into a fence, a concrete house and an electric post, before the vehicle toppled on its side, according to Supt. Ariel Quilang, Ilagan police chief.

Torres died on the way to the Faustino Dy Sr. Memorial Hospital.

His helper Elmer Mascardo, 20, was hurt and is recuperating at the same hospital.   SFM