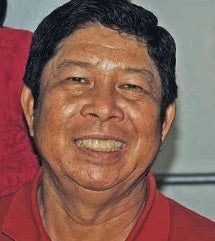 MANILA — Former Nueva Ecjia Governor Tomas Joson III has asked the Sandiganbayan to allow him to contest the sufficiency of prosecution evidence and seek the dismissal of his graft cases.

In a 10-page motion for leave to file demurrer to evidence, Joson sought the Seventh Division’s permission to file a demurrer after the prosecution rested its case last May.

If this is granted, Joson would be allowed to elaborate why the evidence presented during trial would not stand on its own even without rebuttal by the defense.

The case arose from Joson’s donation of five vehicles to the municipal governments of Quezon and Bongabon in February 2007. Quezon town, whose mayor then was Joson’s nephew Eduardo Basilio, also received a mobile clinic.

But, the Ombudsman’s Office of the Special Prosecutor (OSP) said the donations exceeded the provisions of Sangguniang Panlalawigan Resolution No. 37-A, s-2007, which only authorized the donation of heavy equipment.

Joson, however, said the OSP failed to prove that he acted with manifest partiality, evident bad faith or gross inexcusable negligence when he made the donations.

He said public affairs monitoring office head, Dr. Raymund Sarmiento, who initiated the complaint before the Ombudsman, merely claimed that Joson wanted to “paralyze the government of his successor” when he took the witness stand.

Other prosecution witnesses only confirmed the donations were made. “The State’s theory is simply perching on speculation, not on facts,” read the motion.

Joson added the prosecution failed to show the undue injury caused to the provincial government and the unwarranted benefits given to the recipient municipalities.

The motion pointed out the Quezon and Bongabon towns did not necessarily enjoy any preference over other Nueva Ecija municipalities. “The Municipalities did not all face the same dilemma, hence, were justifiably treated differently,” it read.

He said it was “preposterous” to say the provincial government was placed at a disadvantage when the donations benefitted its constituent towns.

“The subject properties did not at all leave the Province of Nueva Ecija and are currently with, and being used by its constituent Municipalities,” the motion stated. “The transfer may simply be described as the movement of an object from the left hand to the right.”