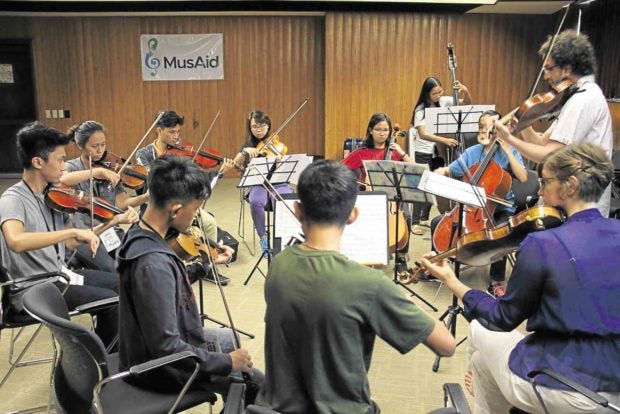 Ang Misyon scholars attend a music camp in Antipolo City. Their mentors are members of MusAid, a global nonprofit organization that supports similar programs around the world. —CONTRIBUTED PHOTOS

Carl Piñon’s exposure to music began early in life. His family’s house in Taytay, Rizal province, stands next to a chapel where the town’s marching band members meet regularly for rehearsals.

“They would play every fiesta and I’ve always been amused by the (sound of the) horn,” he said.

A son of an electrician and a seamstress, Piñon said he was lucky his parents supported his interest in music despite their meager income.

When he was in Grade 3, Piñon’s father accompanied him to audition for the school marching band. “They said I was still too small for a horn so they gave me a trumpet instead,” he recalled.

Now 17, Piñon plays the principal or lead horn in the Orchestra of the Filipino Youth (OFY), a youth ensemble established by “Ang Misyon.” He was discovered by Ang Misyon founder and world-renowned pianist Jovianney Emmanuel Cruz in Taytay in 2014.

“Horns are not easy to play. It has many transpositions, just like having to speak multiple languages,” Piñon said. 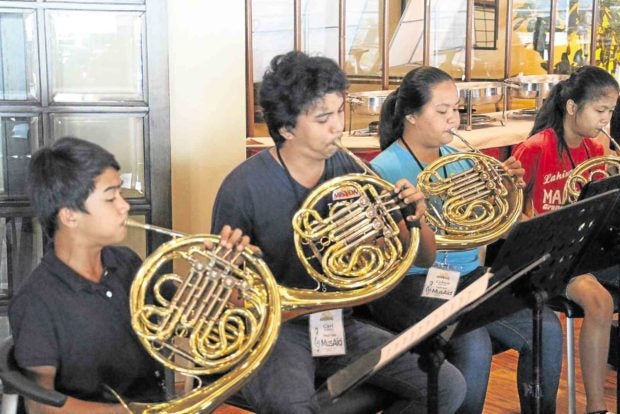 Ang Misyon is a free music program for the poor, talented young Filipino artists. Since 2012, it has trained scholars, some as young as 5, under the discipline of classical music.

It has established OFY and its twin ensemble, Young Filipinos’ Orchestra, with about 120 members.

Currently, it has over 600 scholars in its satellites in Metro Manila and the provinces of Rizal, Antique, Isabela, Aurora, Batangas, Bulacan, Cavite, Cebu, Oriental Mindoro, Nueva Ecija, Leyte and Samar.

“It actually did not start out as a program per se,” Cruz said in an interview during a recent music camp at Eugenio Lopez Center in Antipolo City.

Several years back, he was invited by First Philippine Holdings Chair Federico Lopez to play in their home. This was how Cruz brought up the idea of putting up a concert hall at Rockwell Center in Makati City, telling Lopez how young Filipino artists needed a “home.”

“The wine probably sort of gave me the courage to actually say something. (The next day) I was scratching my head, ‘What did I say?’” he said.

The next thing he knew, Cruz was discussing plans with Lopez Group Chair Oscar Lopez to build a 726-seat concert hall. Designed by Carlos Ott, the architect behind Paris’ Bastille Opera, the concert hall is scheduled for opening in 2019.

Cruz said the group was named after the 1986 film, “The Mission,” (also its translation from English) that featured a Jesuit missionary, whose oboe playing saved his life from the Guarani warriors. It was inspired by the 42-year-old Venezuelan music program, El Sistema, which has produced famous orchestra conductors, like Gustavo Dudamel.

Like the Latin American program, Cruz said he wanted to reach out to the underprivileged communities through music.

“[At first], what we wanted was [to spend] five to 10 years going around the country to inspire communities to build their own orchestras. It did not work out that way,” he said.

Soon after he and Federico founded the music program, parents walked into Ang Misyon’s headquarters in Pasig City while inquiries about audition flooded its website.

“Every day, somebody’s life changes because they realize they have talent that they thought they never had. They can actually overcome fear [and] achieve skills that  they never dreamed of,” Cruz said.

Jose Marie Eserjose, 17, from Taguig City, said he wanted to become an engineer but eventually got “hooked” on classical music.

A son of a tricycle driver and a factory machine operator, Eserjose did not attend any prior violin lessons but learned to play the instrument from the internet.

“He was self-taught by copying everything from YouTube. When he entered the satellite, we had to undo everything,” Cruz said when Eserjose auditioned for OFY in 2014.

He said Eserjose was quick to learn the proper techniques and easily moved up to the first or lead violin section of the orchestra. Now OFY’s concert master, Eserjose would also play the concert pieces from memory.

The scholars are provided with the instruments, concert uniforms and even transportation fare to and from rehearsal or concert venues. “We have one who travels every week from Mindoro just to attend the rehearsals (in Metro Manila),” Cruz said.

In 2016, Ang Misyon was featured as one of the successful El Sistema programs in the book, “Playing for their Lives,” by Tricia Tunstall and Eric Booth. It also invites world-class foreign artists to give one-on-one lessons and orchestral workshops.

Classical music teaches the discipline of paying attention to details and the right notes. But it is having to play for chamber music that fosters camaraderie, selflessness and respect, Cruz said.

In 1991, Cruz, who has won over 20 international competitions and performed in hundreds of concerts, left New York City to teach music at the University of the Philippines. He realized it was still not enough unless he gets his hands dirty.

Ang Misyon aims to empower the Filipino youth by training students who, in turn, will establish community orchestras. By giving them a home, Cruz also said the group wanted to preserve the country’s “artistic treasures.”

“There has to be a better, a more selfless way of dealing with music, not as entertainment [or] self-glorification,” Cruz said.

After all, “all those standing ovations, all those great reviews, you know, the next morning they don’t really matter,” he added.