Meal program bridges cultural divisions, one plate at a time 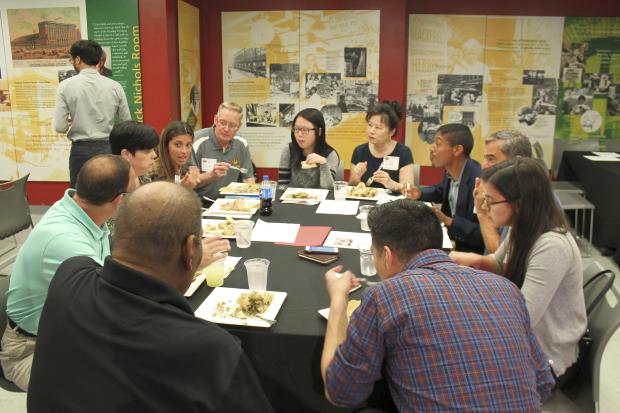 In this photo provided by Alex Styer, participants in a yearlong “Breaking Bread, Breaking Barriers” program share a meal on June 5, 2017, at Reading Terminal Market in Philadelphia. People of different backgrounds are sharing meals from their cultures as part of a yearlong program titled “Breaking Bread, Breaking Barriers,” which organizers say uses good food to help connect groups that might have divisions. (Photo by ALEX STYER / Bellevue Communications Group via AP)

But when dinner was served, the guests seated and plates bearing foods of three different cultures shared, it all made sense.

The meal was part of “Breaking Bread; Breaking Barriers,” a yearlong program that brings people of different backgrounds together for a meal featuring their cultural favorites, bridging differences one plate at a time.

“People cooking and eating together happens every day, but it doesn’t often happen across our social boundaries,” said Anuj Gupta, general manager of Reading Terminal Market, the historic and sprawling indoor market and home to the program. “It’s an incredibly powerful tool to cut through whatever social barriers you want to erect.”

Jews and Muslims have shared Jewish apple cake and baklava as part of the program. Members of the African-American and Korean communities have come together to compare fried chicken recipes.

During the most recent gathering, residents of the city’s Chinese and Mexican communities enjoyed dinner with members of the Philadelphia Mummers Association, a 10,000-strong civic association behind the city’s annual New Year’s Day parade.

For much of their history, Mummers groups included only white men. Women weren’t allowed in the parade until a few decades ago. The tradition is also a family legacy, with many clubs based in southern Philadelphia.

While the 2017 parade was controversy-free, past parades were tainted by performances dubbed racist or culturally insensitive. The Mummers have tried to diversity, creating a division in 2015 specifically for ethnic groups.

The dinner consisted of Chinese dumplings with pork or kale; verdolagas con pollo (verdolagas is an herb also known as purslane that’s largely considered a weed by Americans); and roasted pork rolled with spinach, roasted peppers and provolone cheese, the Mummer contribution in a nod to a popular Italian-American dish served on New Year’s Day.

Before the meal, Chef Alice Ye taught Mummer Jay Polakoff how to make Chinese dumplings as the other diners watched. Someone noted that Polakoff’s seemed a little, well, misshapen.

“It’s actually a hamentashen,” Polakoff said, referring to the tri-cornered confection associated with the Jewish holiday of Purim.

Gathered at tables, the 40 community members shared details about the cultural backgrounds and favorite foods. In one grouping, the diners — of Irish, German, Polish, Mexican, Cambodian and Italian descents — talked about a dumpling being a universal food, with multiple cultures having a version: pierogi, ravioli, empanadas, kreplach. The conversation flowed thanks to a facilitator from the Philadelphia Commission on Human Relations.

In discussing the shared meal, Oscar Galvan, a mechanic who is native of Mexico, said he was tempted to put hot sauce on his Italian pork dish.

They also reflected on how food related to friends and family.

“One of the neatest ways to promote friendship is to share your ethnic food, something you’re so proud of,” said Carol Wong, an educator of Chinese descent.

“In Mexico, it’s all about food,” said Ivette Compean, who moved to the US from Mexico six months ago. “They’re always feeding you. It’s how they tell us they love us.”

“Breaking Bread; Breaking Barriers” was created with an $85,000 grant from the nonprofit John S. and James L Knight Foundation. Gupta said he was inspired to seek the funding after reading sociologist Elijah Anderson’s “The Cosmopolitan Canopy/Race and Civility in Everyday Life.”

Anderson, who lives in Philadelphia and taught at the University of Pennsylvania, found there are certain places in cities where people of different cultures and backgrounds unite without conflict. Reading Terminal Market — a bustling home to butchers and fishmongers, sandwich stalls and Amish farmers — was one of them.

“It’s a place of refuge and convergence, old and young, black and white, coming together and feeling good around issues of food,” Anderson said. “It’s a place where people get along even though we know there are fault lines. It’s a beautiful thing. It’s inspiring.”

The program hosted one of its most emotional dinners in January, Gupta said. It brought together Syrian refugees and residents deeply rooted in their northeastern Philadelphia neighborhood. The Syrian contributions included falafel and hummus. The American offerings were blackened catfish and collard greens.

During the meal, held a few days after the announcement of President Donald Trump’s original travel ban that included Syrian refugees, the refugees shared stories of their lost homes and changed lives.

At evening’s end, Gupta said, one of the refugees — a woman in her 50s who had been quiet during the meal — stood up and shared her thoughts with the help of an interpreter.

“I thought this evening was just going to be about food,” she said. “It turns out it was about unity.”