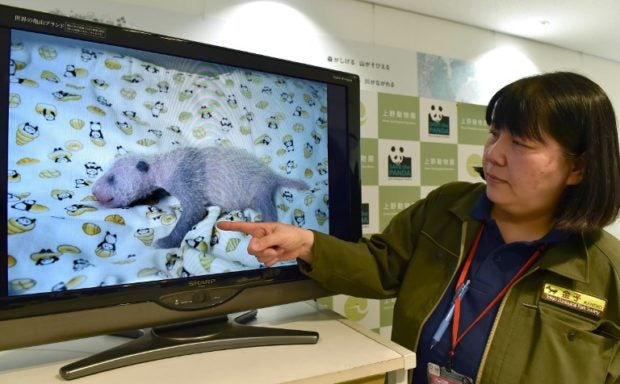 Ueno Zoological Gardens official Mikako Kaneko shows images of the female cub of giant panda Shin Shin during a press conference in Tokyo on June 23, 2017.
A baby panda recently born in Japan is a girl, the Tokyo zoo said on June 23, adding that the little cub appeared to be in good health. AFP

TOKYO—A baby panda recently born in Japan is a girl, a Tokyo zoo said Friday, adding that the little cub appeared to be in good health.

A zoo spokesman said the female cub’s sex was confirmed based on pictures sent to a panda research center in the shy animal’s native China.

Pandas are born pink, hairless and weighing around 100 grams (three-and-a-half ounces) — so small it can be difficult to determine their sex.

The little cub “seems to be in good health” and is drinking her mother’s milk, the spokesman said, adding she is now 17.6 centimeters (seven inches) long and weighs 283.9 grams (9.9 ounces).

“She has started to grow black fur around her eyes and on other parts of her body,” the spokesman added.

Zoo keepers were carefully tending to the cub and her 11-year-old mom Shin Shin, who resumed her daily schedule of munching young bamboo stalks and rolling around days after giving birth.

The birth of the as-yet-unnamed cub comes after the last panda’s arrival at Ueno Zoo ended unhappily, with the baby dying from pneumonia.

The death reduced one of the zoo’s directors to tears./rga

Read Next
Russia fires missiles from Mediterranean at IS in Syria
EDITORS' PICK
Nestlé Philippines’ ‘NESCAFÉ Plan’ bags Grand Anvil at PRSP 56th Anvil Awards
Smart reinforces superiority with best speed and mobile video experience in PH
Every Filipino home can now be a smart home with realme TechLife
New 3,045 COVID-19 cases push PH total active cases to 40,074
LTO’s P500-M deal for screws draws scrutiny
How to lose a PH genius: Wesley So officially a US citizen
MOST READ
How to lose a Filipino genius: Wesley So officially a US citizen
US lays out list of aid to ‘satisfy’ Duterte following VFA payment demand
Robredo on Sara Duterte leading poll surveys: Why are Filipinos drawn to leadership of this kind?
Rights lawyer survives attack by playing dead, loses all case files
Don't miss out on the latest news and information.