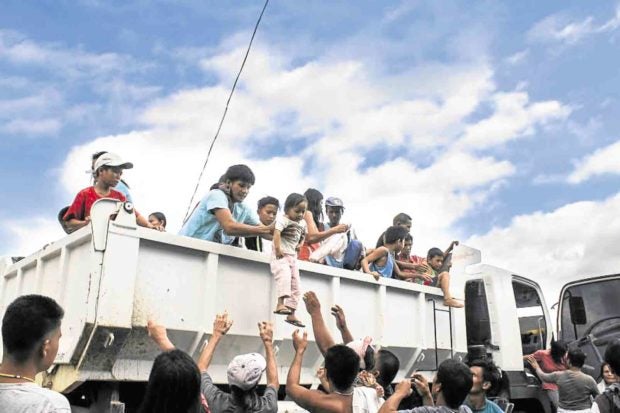 FLEEING TERROR Residents displaced by the fighting between government troops and members of the Bangsamoro Islamic Freedom Fighters in Pigcawayan town in North Cotabato province arrive at the town hall compound, away from the terror that gripped their community on Wednesday. —VALERIE LAMBO/CONTRIBUTOR

KIDAPAWAN CITY—The crisis that gripped a community in Pigcawayan town in North Cotabato province when about 200 Moro rebels stormed a government militia outpost and sparked a gunfight is over.

But the 15-hour standoff, which started when members of the Bangsamoro Islamic Freedom Fighters (BIFF) attacked the villages of Malagakit and Simsiman at 4 a.m. on Wednesday, killed a government militiaman and wounded two others. The fighting also forced more than 1,000 residents to flee their villages.

The military claimed to have killed six and wounded eight of the fleeing BIFF men but Abu Misri Mama, spokesperson for BIFF, denied this. Mama said no one among his group was killed or wounded.

Capt. Napoleon Alcarioto, 602nd Brigade spokesperson, said Abraham Cutay, who was scheduled to graduate from a six-month Citizens Armed Forces Geographical Unit training on Thursday, was killed by a BIFF recruit in front of his wife as they tried to flee Barangay Malagakit.

Cutay was hit in the knee as he and his family tried to flee during the gunfight.

“They tried to escape but they were caught by BIFF members,” Alcarioto said, quoting the victim’s wife.

Cutay’s wife said the BIFF recruit who killed her husband was initially hesitant to pull the trigger but was threatened by some BIFF members that he would be killed if he would not shoot Cutay.

Alcarioto said two other militiamen, Angel Verona and Resty Segundera, were wounded in the firefight on Wednesday.

The standoff ended on Wednesday night when BIFF men withdrew toward Liguasan Marsh in the nearby province of Maguindanao.

Mayor Eliseo Gracesa said at least 73 residents, who were trapped in the village when fighting erupted, were unhurt.

“Clearly, they were used as human shields by BIFF,” Encinas said. “When darkness came, they fled.”

Mama said they attacked the village as a response to military offensives in Mamasapano town in Maguindanao. He warned the military of more attacks.

“I told you we did not use civilians as human shields. We protected them inside the school (Malagakit Elementary School),” Mama told the Inquirer in a telephone interview on Thursday.

Alcarioto said information on slain and wounded BIFF members came from residents who were rescued by soldiers.

These residents, he said, told soldiers that BIFF rebels took the bodies of their slain companions as they fled on board a motorized banca traversing Liguasan Marsh.

“We are basing our claim on the accounts of civilians trapped and held hostage inside Malagakit Elementary School. They were later rescued by our 34th Infantry Battalion forces,” Alcarioto said.

Romeo Capao-an, Pigcawayan municipal disaster risk reduction and management officer, said the number of displaced residents reached 1,200 on Thursday. He said the local government took them to a covered court in Barangay Poblacion.

Capao-an said they discouraged residents from returning to their villages on Thursday while bomb experts were clearing the area of improvised explosive devices.

Elpidio Singon, a farmer living close to the militia outpost in Malagakit, said he was awakened by gunfire on Wednesday.

“We ducked and when gunfire stopped, I brought my family out of the house and we ran away,” Singon said.

He said he saw his neighbors also fleeing, bringing with them their children and some personal belongings.

“We ran with nothing but only our clothes on our back,” another villager, Susan Cando, 39, told reporters.