BIFF: Davao is next; Duterte marked for death | Inquirer News

BIFF: Davao is next; Duterte marked for death 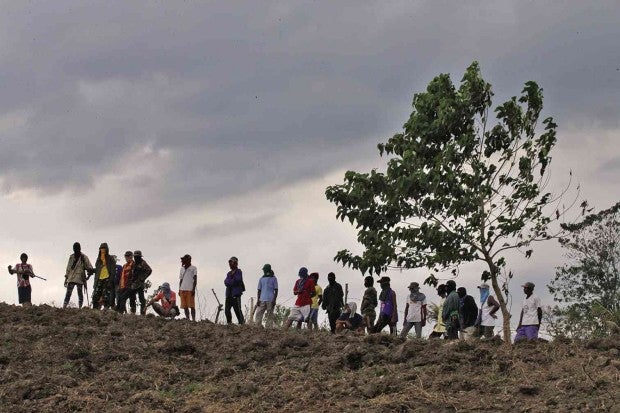 FILE – DARK CLOUDS hover over the gathering of an armed Christian group calling itself “Red God Soldiers” and claiming to be a defense force set up to protect civilian communities against attacks by members of the Bangsamoro Islamic Liberation Front (BIFF). JEOFFREY MAITEM / INQUIRER MINDANAO

COTABATO CITY – Aside from attacking a militia base and taking hostage residents in Barangay Malagakit in Pigcawayan town in North Cotabato, members of the Bangsamoro Islamic Freedom Fighters (BIFF) also left messages for President Duterte.

Photos of the President were taken out of some classrooms and were burned.

On one blackboard, the armed men wrote: “Shoot to kill ka namin DU30 (It’s shoot to kill for Duterte).”

“Malagakit chapel was devastated after the BIFF attack. Statues were broken and consecrated hosts scattered around the altar,” Fr. Dominic Villa, parish priest of San Blas parish in Pigcawayan, said.

“It is a clear disrespect and desecration of the sacred place for worship. What we need is respect,” he said.

The priest said the images of the Virgin Mary and a huge Crucifix were broken. The tabernacle, a place where consecrated hosts are kept, was opened and the hosts scattered on the floor. Several other statues were on the floor.

Villa said over the past two weeks, text messages had circulated around about a plot by BIFF to attack Malagakit, the last Christian village from Poblacion to the marshland.

“About two weeks, residents of Malagakit and Simsiman have been evacuating at night, leaving the males behind to take care of their properties,” he said.

Villa said Barangay Malagakit recently had its patronal fiesta but due to reports of impending attack by the BIFF, he instead held the fiesta Mass at the main church in Poblacion, Pigcawayan.

Pigcawayan Mayor Eliseo Garcesa also confirmed that text messages about BIFF harassment had circulated prior to the attack on Wednesday.

One of the civilians, Bai Wahim, a resident of Malagakit, told reporters they were herded by the gunmen brandishing firearms and black ISIS flag to the elementary school.

“My house is near the school. We were herded there, all that the gunmen could grab were ordered to proceed to the school for our safety, they said,” Wahim, a Moro, said.

“We have no conflict there, we live together peacefully. In fact, there were inter-marriages among Maguindanaons and Ilonggos, until the BIFF arrived,” she said.

Residents complained their homes were ransacked by the gunmen while stores were looted of canned goods and other food stuff.