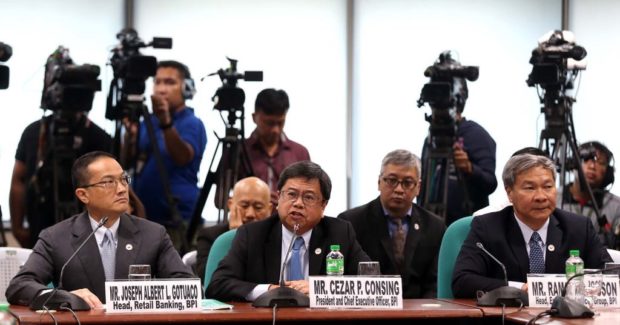 As much as P46 million was “accidentally” withdrawn by clients from Bank of the Philippine Islands (BPI) at the height of the massive system glitch that led to erroneous electronic “mis-postings” on their accounts, bank executives told a congressional inquiry on Thursday.

Cezar Consing, BPI president and chief executive officer, said the amount was still in the process of being recovered more than two weeks since the technical glitch caused unauthorized transactions to be reflected on some BPI accounts on June 7 and 8.

“There were mis-postings, and there was an amount, which in some cases, [was] withdrawn” by clients, he told the House panel.

“Isn’t that illegal?” asked Eastern Samar Rep. Ben Evardone, chair of the House committee on banks and financial intermediaries, which called an inquiry into the back-to-back malfunctions experienced by clients of BPI and Banco de Oro (BDO) this month.

Consing replied: “It was accidental. The fact is most of this P46 million is getting paid back, most, if not all of it.”

“There’s still P46 million that outstanding. Most of them are merchants, small businesses. We are making arrangements with them to settle. Almost all of them have expressed willingness to settle,” he added.

Joseph Gotuaco, chief financial officer and executive vice president at BPI, said the average mis-posting on both debit and credit was about P7,000.

“The highest amount that was debited was P1.6 million and the highest credit was around P2.5 million,” Gotuaco told the body.

Parañaque Rep. Gus Tambunting asked the BPI executives what kind of assurance they could give their customers that their money would not be stolen.

“In fact, we have had some clients saying ‘I did not withdraw or deposit,’ but we do have records because each of our ATMs produces a time stamp. If they withdraw from the ATM, we also have CCTVs. We go through a reconciliation process, we check the log, we go through the CCTV,” he said.

“We guarantee your honor that no moneys were lost,” Jocson said. JE