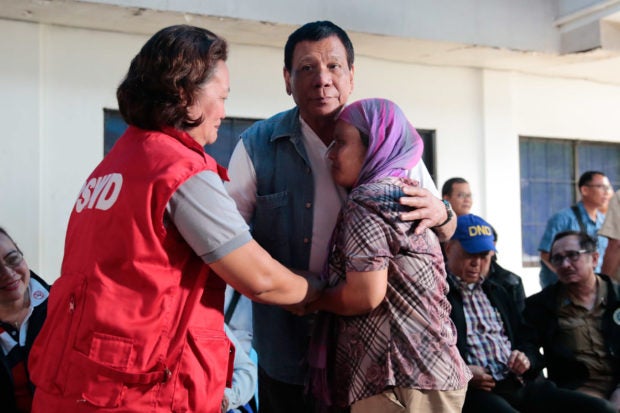 President Rodrigo Roa Duterte shows sympathy to one of the evacuees from Marawi City during his visit at the Iligan City National School of Fisheries on June 20, 2017 where 229 displaced families have taken shelter. REY BANIQUET/PRESIDENTIAL PHOTO

President Rodrigo Duterte was showing he was sensitive to the plight of evacuees from Marawi when he apologized to them on Tuesday for the destruction of their city in the fighting between government troops and terrorists and for declaring martial law in Mindanao, Malacañang said on Wednesday.

Presidential spokesperson Ernesto Abella, however, maintained that it was necessary for the President to declare martial law to deal with the conflict in Marawi.

“The President is being sensitive to the damage inflicted upon the city, especially to the plight of the Marawi residents whose lives have been disrupted by the clashes during the holy month of Ramadan,” Abella said.

“However, the declaration of martial law was necessary due to the clear and present danger presented by the local terrorist groups,” he added.

Abella said Mr. Duterte had to take swift and decisive action to suppress the “rebellion” and prevent it from spilling over to other areas of Mindanao.

During a visit to displaced Marawi residents in Iligan City on Tuesday, Mr. Duterte said he was sorry for the devastation of the city in the battle between government forces and Islamic State-inspired terrorists from the Maute group and their allies from the Abu Sayyaf bandit group, who seized the city on May 23 to establish an enclave for the Middle East-based jihadist group in Southeast Asia.

“I would like to say to the Maranao people that I am very, very, very sorry that this happened to us,” Mr. Duterte said.

“I hope in the near future, you will find a new heart to forgive my soldiers, the government, even me for declaring martial law. I had no choice. They were destroying Marawi,” he added.

Mr. Duterte explained that he had to declare martial law because the extremists were wreaking havoc in the city.

He said he believed the Maranaos could weather the crisis.

Mr. Duterte said the Maranaos were known for their resiliency, their ability to weather crises and flourish anywhere.

He said he had set aside P20 billion for the reconstruction of Marawi, P10 billion more than his earlier pledge.

“I will prioritize the poor. Never mind the rich,” he said.

He said he would help those who needed to be relocated.

“And then we will rehabilitate. Marawi will regain its splendor. It will become beautiful again,” he said.

Thousands of residents have fled Marawi, which used to be a bustling city where Muslims and Christians have coexisted for decades, to escape the fighting.

Mr. Duterte also mourned the loss of soldiers in the clashes and promised to take care of  their families.

Sixty-six soldiers have been killed in the fighting.

On Tuesday, Mr. Duterte lent his F-28 presidential jet to  wounded soldiers so they could fly from Cagayan de Oro City to Manila for treatment at AFP Medical Center-V. Luna General Hospital in Quezon City.

“We also hope that this apology opens the gate for a more productive dialogue between the President and our people so that the President may hear the pain, suffering and the voices of ordinary Maranaos so that he may take guidance from it in his subsequent actions,” he said.

But Samira Gutoc Tomawis, a former member of the Bangsamoro Transition Commission that is working out a final peace agreement with the government, said Mr. Duterte’s apology could not bring back a 15-year-old boy who was hit by a stray bullet in the fighting and died or the mothers and babies who died after being displaced by the crisis.

“But thank you. Help the living who are dying. Please, no more collateral damage, destruction, Enough, sir,” Tomawis said.

A former Army colonel said he understood Mr. Duterte but the President blundered by declaring martial law in Mindanao.

“Many armed Maranaos are against the [IS] and they could have joined the fight. But with martial law, that is no longer possible,” he said.

Alexander Alag, a spokesperson for the Marawi local government, said it was too late for Mr. Duterte to apologize because the city had already been destroyed.

“It’s too late. First, we have been asking him to stop the bombing and the airstrikes, but what did he say? That he didn’t care because he would rebuild Marawi, anyway,” Alag said.

He said, however, that he was accepting Mr. Duterte’s apology.