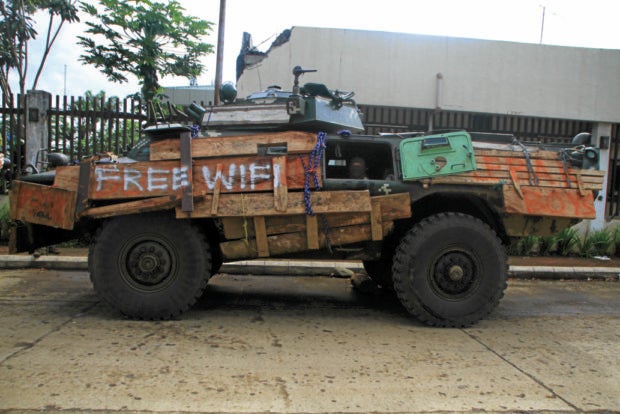 MARAWI CITY — Filipino military innovation and ingenuity are saving the lives of ground troops battling to liberate this city from Islamic State (IS)-inspired fighters who use antitank weapons to slow down government forces.

The 90-mm recoilless rifles, commonly called 90-RRs, and rocket-propelled grenades, known as RPGs, have been proven effective in immobilizing various kinds of armored vehicles for decades in many conflicts around the world, particularly in the Middle East.

In the fight against Moro rebels before the Marawi siege, the military had found 90-RRs, also called M67s, and RPGs to be serious threats to the armored vehicles of advancing troops.

RPGs and similar rounds use high explosive antitank heat that can penetrate through more than 180 millimeters of steel armor, thicker than what is used by V-150 armored vehicles.

Lt. Col. Jo-ar Herrera, spokesperson of the Army’s 1st Infantry Division, said tank commanders had decided to cover armored vehicles with planks of wood for added protection against fighters belonging to the Abu Sayyaf, Maute group and their allies.

The wood serves to disperse the impact of an antitank warhead before it hits the steel shell of an armored personnel carrier (APC) or a tank.

“Our commanders took the initiative to innovate and ordered that all armored vehicles be reinforced with additional protection so it can withstand the antiarmor capability of the enemy,” he said.

Herrera said this was done to minimize casualties among troops aboard APCs advancing toward enemy positions and to prevent damage to armored vehicles.

He said the additional protection had been proven effective when one wood-reinforced armored vehicle was hit by an antitank weapon fired by a Maute gunman during the Marawi fighting.

“The shrapnel did not get past the plank of wood. The splinters hit the wood and did not pierce the (metal) armor,” he said.

An Inquirer journalist covering the Marawi siege first saw the wood-reinforced APCs on the fifth day of the fighting.

Commenting on the wooden-clad armored vehicles, Kyle Mizokami, who writes on defense and security issues and weapons systems for international publications, said to be effective, the wooden armor would have to “stand away from the vehicle’s hull, or be plenty thick.”

“In the first case, building a ‘cage’ of wood armor would do the trick. This would cause the RPG warhead to detonate against the wood and burn through the ‘armor’ but dissipate before it actually reached the vehicle’s surface,” he said in a Popular Mechanics article.

As an example, he said, the US Army’s Stryker armored vehicles are surrounded by a steel cage hard enough to trigger the contact fuse of an antiarmor warhead.

“If a cage isn’t available, then a lot of wood would help. At least a foot of wood armor might do the trick to dissipate the armor-piercing molten jet. Maybe,” he said.

Herrera said that after the military dealt with their antitank weapons, IS fighters used fuel bombs, or “Molotov cocktails”—bottles that are filled with gasoline, and ignited and hurled at a target—against armored vehicles.

Gunmen holed up in strategic positions in some parts of the city were also slowing the advancing troops with sniper fire.

Last week, Australian journalist Adam Harvey was wounded in the neck by a sniper’s bullet. On Monday night, reporters dashed for cover from sniper rounds behind the thick concrete walls of the capitol building.

“And that is the smallest caliber being used by the enemy,” he said. —With reports from Richel V. Umel and Inquirer Research