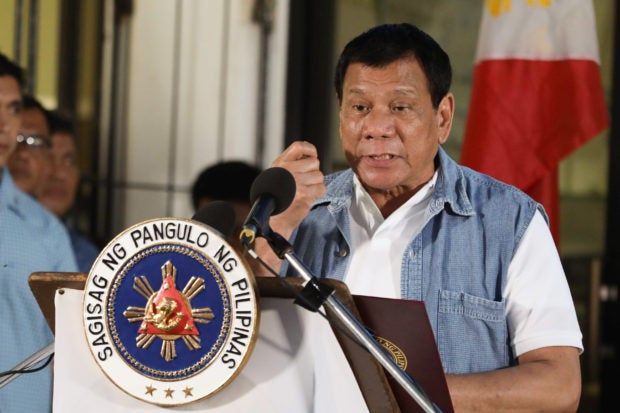 President Rodrigo Roa Duterte delivers a speech during his visit at the Iligan City National School of Fisheries on June 20, 2017 where 229 displaced families from Marawi City have taken shelter. ACE MORANDANTE/PRESIDENTIAL PHOTO

MANILA — Warning against “civil war” in Mindanao, President Duterte said on Tuesday the country’s hope in stamping out the Maute terrorists lay in fast-tracking the peace process with Moro separatist groups.

The President warned that should the violence unleashed by the Maute terrorists in Marawi spill over other parts of Mindanao, Christians would arm themselves and a civil or communal war could ensue between Christians and Muslims.

“Because if there’s civil war, there would be killings. Here in Mindanao, there are more Christians and they have better guns. They are buying. The rich ones, they’re stockpiling guns,” he said.

“That’s what’s dangerous. To prevent a communal war, we really need to stop this…I did not expect (the number) of our casualties to be this high,” he said, referring to the government casualties in Marawi.

The President said the armed forces would then have to deal not just with Maute terrorists but also armed Christians.

However, he noted that the Mautes’ ideology was different from those of the two separatist groups because it was imported “from the Middle East” and concerned itself with “killings and violence.”

“I said in my first command conference with your officials that I was looking at dark clouds ahead. Guard against the arrival of ISIS,” he said.

Mr. Duterte said that he realized the situation was serious when Abu Sayyaf bandits—many of whom were Tausugs from the Sulu archipelago—and Maute Group members—many of whom were Maranao from Lanao—transcended their tribal loyalties and joined forces in Marawi.

“The fact that they were united, that’s when I said, ‘This is now dangerous,’” he said.

The President said he was reluctant to declare martial law all over Mindanao but not doing so would have compounded the problem.

“If I didn’t declare martial law, we would face layers of problems that we might not be able to solve. Those who question martial law think that the problem is limited only here,” he said.

“I really did not want to have martial law. I was only forced to do it because if I didn’t, the mess in Mindanao would spread. We will then have a hard time,”  he added.  SFM

Read Next
Palace: No order to scrap peace talks with Reds after Iloilo attack
EDITORS' PICK
Acer Philippines welcomes you to its first flagship store
Is your company a growth champion? Stand up and be recognized!
New Year, New Rediscoveries
CHEd steps into UP-DND row over ‘problematic’ accord, to broker talks
Lacson advises vaccine czar to ‘watch his back’
Climate advocates among first to cheer new US president
MOST READ
LOOK: Duterte registers for the national ID system
Lacson advises vaccine czar to ‘watch his back’
Western Visayas PNP crime lab chief sacked after saying 7 of 9 IPs killed in CIDG raid negative in paraffin tests
IATF OKs licensure exams scheduled from January to March 2021
Don't miss out on the latest news and information.