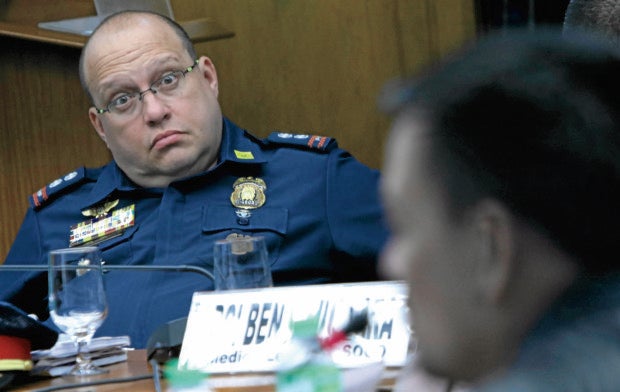 Supt. Marvin Marcos has been allowed to post bail after the Department of Justice downgraded to homicide the murder charges filed against him and other policemen accused in the killing of former Albuera Mayor Rolando Espinosa Sr. Subsequently, the Senate minority is seeking a probe into the downgrade. INQUIRER FILE / RICHARD A. REYES

The Senate minority bloc is set to file a resolution expressing “grave concern of the Senate” over the Department of Justice (DOJ)’s decision to downgrade the cases filed against the cops involved in the killing of Albuera, Leyte, Mayor Rolando Espinosa Sr.

Senator Risa Hontiveros said the opposition senators are finalizing the resolution as they plan to invite Justice Secretary Vitaliano Aguirre II to explain why the DOJ allowed the cases against Supt. Marvin Marcos and his men be reduced from murder to homicide.

“The minority senators will file (a) resolution expressing the grave concern of the Senate,” Hontiveros said in a text message to reporters.

“This may be the last straw for many of us. We cannot allow Secretary Aguirre to continue to toy around with our justice system. Enough’s enough,” Hontiveros said.

This after Senator Panfilo “Ping” Lacson expressed concern over the DOJ’s decision on the Espinosa killing, urging the Senate to denounce the Aguirre-led agency for giving Marcos and his team a lighter offense.

In March, the Senate committee on public order and dangerous drugs, which Lacson chairs, recommended the filing of murder charges against the members of the Criminal Investigation and Detection Group (CIDG) Eastern Visayas led by Marcos.

The lady senator also called Aguirre a “flip-flop king” for approving the downgrading of charges after he issued a resolution in March supporting the findings of the Senate and National Bureau of Investigation (NBI) that the Espinosa killing was a clear case of premeditated murder.

This development further “downgraded his reputation and integrity before the public’s eyes,” the senator said.

“From being the fake news king of Padre Faura, Secretary Aguirre is also now immortalized as the DOJ’s flip-flop king, an absolver of murderers,” Hontiveros said.  CBB/rga