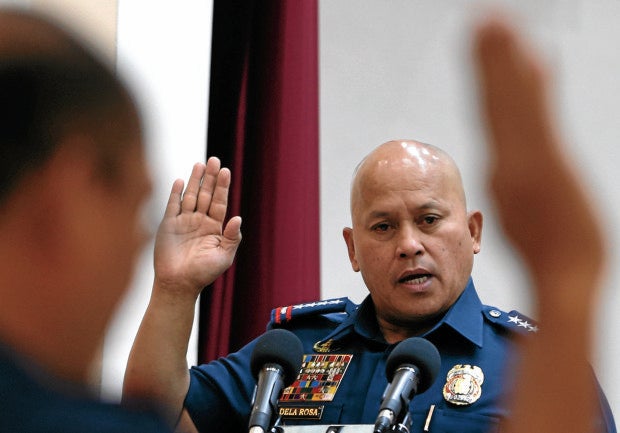 CALAMBA CITY — Philippine National Police (PNP) Director General Ronald “Bato” dela Rosa appealed to critics of the government’s war on drugs to respect the court’s decision to release the policemen tagged in the killing of a Leyte town mayor.

Supt. Marvin Marcos, the former chief of the Criminal Investigation and Detection Group in Region 8 and 18 other policemen were released Friday after each posted a P40,000 bail, following the decision of the Regional Trial Court in Baybay City to downgrade to homicide the murder charges filed against them.

Albuera, Leyte mayor Rolando Espinosa Sr., who was arrested and detained for his alleged involvement in illegal drug trafficking, was shot dead inside the sub-provincial jail in Baybay City in November 2016. The Senate investigated the alleged extrajudicial killing and recommended the filing of murder against the policemen.

Dela Rosa, in an earlier interview in Cavite on Saturday, said he had been informed of the release of the policemen.

“We have to respect whatever decision that came out because that is how our criminal justice system works,” he told reporters here on Monday where he was guest at the commemoration of the 156th birth anniversary of national hero, Jose Rizal. “Sometimes you win, sometimes you lose. That’s how it works,” he said.

Asked if he felt “winning” over the court’s decision, Dela Rosa said that as commander of the PNP, he should look after the welfare of his officers.

President Duterte, whose government launched a massive crackdown on illegal drug traders, earlier said he would not allow the policemen involved in the Espinosa slay to go to jail.

“I am on the middle ground. (Although) I am more inclined, leaning towards the welfare of my men,” he said.

Dela Rosa said the PNP has been building up cases against suspected narco-politicians, including former Marawi City mayor Fajad Salic.

Salic, who was arrested for rebellion, could also face drug-related charges after government forces found packets of illegal drugs during last week’s raid into his home.

Nevertheless, Dela Rosa said the court’s decision on the case of Marcos and his co-accused should not affect the investigation of the PNP Internal Affairs Service of the administrative charges which were
separate from criminal cases.  SFM/rga