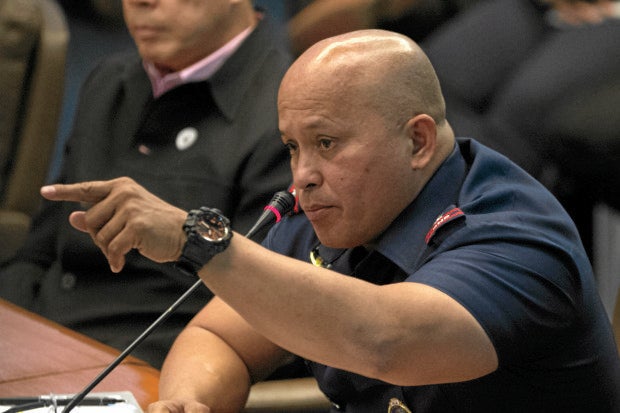 Senior Supt. Christopher Tambungan, deputy regional director for operations, would take over as provincial police chief in an acting capacity.

Supt. Gilbert Gorero, PNP Western Visayas spokesperson, said the PNP had a “one-strike” policy that called for the relief of a town or provincial police chief if rebels launched successful attacks in their areas.

The entire police force of Maasin town was also replaced by policemen from the provincial public safety company.
Tambungan, during an inspection of the Maasin police station after the NPA raid, was heard berating policemen who had been overpowered by the rebels.

No shot was fired during the raid. Rebels disarmed the policemen, handcuffed them and held them at gunpoint as the rebels took guns and other valuables at the station. One of the vehicles they used to flee belonged to police.

In a statement on Monday, Julio Montana, spokesperson for the NPA’s “Waling-Waling” Command, denied police claims that the rebels also took P28,000 in cash and pieces of jewelry during the raid.

The rebel statement said it expected police to make up stories “to cover [up] the weaknesses among their ranks.”

The Maasin police station was among 15 police offices in Western Visayas that had been identified as NPA targets.
Jesus Dureza, presidential adviser on the peace process, said the raid was “disheartening.”

He said it had a “negative impact” on ongoing efforts to put peace talks between communist rebels and the government back on track.

Dureza, however, was quick to point out that the Iloilo raid did not violate an informal truce in Mindanao between the rebels and the government amid the ongoing war on terrorists in Marawi City.

But a military spokesperson said that since there was no formal truce yet, the Armed Forces would continue offensives against rebels.

“Our forces have not lowered its heightened alert against the NPA,” said Brig. Gen. Restituto Padilla, Armed Forces spokesperson.

The raid on the Maasin police station, he said, was another sign of the rebels’ lack of sincerity in the peace process.

Ernesto Abella, Palace spokesperson, said the NPA raid in Maasin was “unfortunate” since it happened on the same day that the Armed Forces reciprocated an order given to rebels to cease offensives against government targets in Mindanao.

“Although the attack was not in Mindanao, the act was opportunistic in nature,” Abella said.

“We ask the National Democratic Front of the Philippines to call on their comrades on the ground to walk the talk,” Abella said.

Despite the raid in Maasin, though, Abella said the government was committed to the informal truce with rebels in Mindanao.

Dureza had described the raid in Maasin as part of “birth pains” of the deal to cease offensives in Mindanao between rebels and the government.

Padilla said the rebel claim that the Maasin police station was attacked because policemen there had been extorting from vendors and tolerating drugs was “old.”

“Their objective is to get more arms,” Padilla said. —With reports from Philip Tubeza and Nikko Dizon / SFM/atm

Read Next
132-year-old lobster released after 20 years of captivity in a restaurant
EDITORS' PICK
Metro Manila logged most number of new COVID-19 cases — OCTA Research
WHO says monkeypox is not yet a health emergency
House energy committee chair Arroyo bats for cheap electricity
A massive highway complex makes living in the South highly attractive
Beyond the Chocolate Hills: A farm-to-table, heritage culinary adventure of Bohol
Guarding Sara: Why next VP is getting own security team
MOST READ
Leon Barretto steps up for sisters, asks dad Dennis Padilla: ‘Please stop resorting to public shaming’
LOOK: Rita Daniela pregnant with first child
Bea Alonzo, under lie detector test, says she wants prenup agreement with future husband
Marjorie Barretto to speak up on Dennis Padilla, kids’ relationship ‘in time’
Don't miss out on the latest news and information.