‘I will not negotiate,’ President Duterte says as more soldiers are thrown into the battle zone. ‘How about my soldiers who have died? How about [the terrorists’] murderous rampage?’
By: Franklin A. Caliguid, Nestor P. Burgos Jr., Nikko Dizon - @inquirerdotnet
Philippine Daily Inquirer / 12:34 AM June 19, 2017 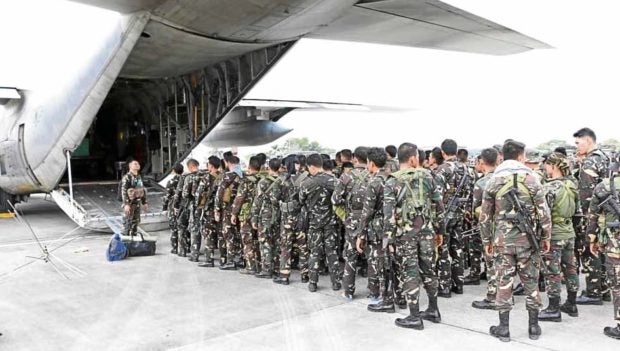 The military has sent more troops to Marawi after President Rodrigo Duterte rejected the offer of Maranao religious and political leaders to negotiate with Maute and Abu Sayyaf terrorists holed up in the city for an end to the crisis.

Troops from the Philippine Army’s 82nd Infantry Battalion flew in two groups from Iloilo City on Saturday to reinforce security forces in Marawi, battling the terrorists who seized the city on May 23 to establish an enclave for the Islamic State (IS) jihadist group in southern Philippines.

A total of 327 people have been killed in four weeks of fighting, including 242 terrorists, 59 soldiers and 26 civilians.

The military deaths have angered Mr. Duterte, who said he would not let this loss of lives pass unpunished.

Speaking to troops in Butuan City on Saturday, the President said he understood the desperation of Maranao religious and political leaders who had offered to talk to the terrorists to help bring the crisis to an end.

But he said any effort to bring the terrorists to the negotiating table might already be too late, as the terrorists appeared determined to fight to the death.

“If they go to the Maute to talk, talk about what? Surrender? Settlement? Just like that?” Mr. Duterte said.

“I will not [negotiate]. How about my soldiers who have died? How about [the terrorists’] murderous rampage?” he said.

The President said, however, that he would not block the plan of the Maranao religious and political leaders to talk to the terrorists.

“You do not need my permission to do that,” he said, adding that he would not apologize for the devastation caused by the fighting in Marawi because the Maranao leaders had failed to act swiftly to help contain the rise of the Maute group in the city.

“But I am not apologizing for anything there, because they brought the problem to themselves. Why didn’t they inform the police, me, the Armed Forces, that there were terrorists going in and out of the city?” he said.

Mr. Duterte also said he would keep martial law until he was satisfied with the results of the military campaign to crush the terrorists in Marawi.

“Martial law stays as long as there’s fighting, until I am satisfied or we are satisfied that not a single shot will be fired ever again,” he said.

He defended the military’s bombing of targets in Marawi.

“There are places in Marawi that were bombed or are being bombed now. And I am sorry to say that, it’s because it is really already a full-blown war. I cannot sacrifice one single soldier,” he said.

The death of a soldier last week as security forces advanced to step up pressure on the IS-inspired terrorists brought to 59 the government’s losses in the fighting.

The military, however, has not identified the latest soldier to be killed in action and has not yet disclosed the circumstances of his death.

Efforts to rescue civilians trapped in the fighting, as well as those taken hostage by the terrorists, continued, Arevalo said.

“Enemy resistance continues to dwindle and enemy-held areas continue to get smaller as troops advance,” he said.

The military said earlier that the battle zone had been reduced to just four of the city’s 96 villages, an area of about 8.7 square kilometers.

But the military advance was proving difficult because the terrorists were using civilians as human shields and mosques as staging areas for attacks on government troops, Arevalo said.

Another job proving difficult for the military was recovering the bodies of civilian casualties, as snipers were busy trying to keep off rescuers.

To hasten the clearing operation, the military sent in more than 800 troops of the Capiz-based 82nd “Bantay Laya” Infantry Battalion on Saturday.

The battalion was formed in Iloilo in 2009 and until Saturday had not been deployed outside of Western Visayas.

The troops have been assigned to internal security operations in Guimaras province, Iloilo City and parts of Iloilo and Antique provinces.

Lt. Col. Vener Morga, the battalion commander, said the troops were ready to be assigned to the front lines in Marawi.

Morga, former commander of the Army’s 55th Infantry Battalion assigned to Butig town in Lanao del Sur province that operated against the Maute group, said he apprised his troops of the situation in Marawi and the nature of the operation against the terrorist group.

“The troops are already capable. This deployment will further improve the battalion’s capability,” he said.

The battalion was supposed to be assigned to Marawi in January, but was asked to stay to help secure high-profile events in Western Visayas, including meetings of the Association of Southeast Asian Nations.

The troops were again put on notice two weeks ago for possible deployment to Marawi, but it was only on Friday that the order to go came.

A statement from the 3rd Infantry Division said among those who attended the sendoff ceremony on Saturday was Antique Gov. Rhodora Cadiao, who thanked the soldiers for their work that “paved the way” to make Antique “insurgency-free.”

The 33rd Reconnaissance Company assigned to Negros Island has been brought to Iloilo to take over the area left by the 82nd Infantry Battalion.

Troops of the 61st Infantry Battalion based in Tapaz town in Capiz province have also been redeployed, according to Morga.

With the battle against the Maute and Abu Sayyaf terrorists turning into clearing operations, Gen. Eduardo Año, chief of staff of the Armed Forces of the Philippines, said the military was prepared to start discussing the rehabilitation and reconstruction of Marawi.

The military has prepared the Combat Engineering Brigades from the Army and the Navy for immediate deployment “as soon as the clearing operations [are] completed,” Arevalo said.

“Task Force Ranao, [which] has just been activated, is in full swing in ensuring that efforts to save lives of innocent noncombatant civilians remain a primary specific task to be complied with. It likewise takes charge in the collating and in the distribution of relief goods to evacuees in tandem with the [local governments],” Arevalo said.