If joke’s on you, you’re close to President Aquino 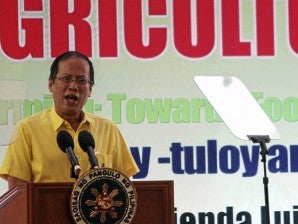 How can you tell if you are “close” to President Benigno Aquino III?

It’s when he often teases or plays a joke on you.

Mr. Aquino himself said so on Tuesday, citing as an example Agriculture Secretary Proceso Alcala, whom he lavishly praised in a speech for improving the country’s rice production.

“Procy,” the President said, often got a ribbing from him since their days in Congress—a sign of how much he liked and admired the man.

Speaking at the 8th National Organic Agriculture Conference organized by Alcala in Tarlac City, Mr. Aquino explained: “Kapag kayo po’y ’di ko kayang mabiro, talagang ’di ho tayo malapit (If I can’t bring myself to tease you, then we are not really close).”

The opposite had been true with Alcala “because that’s the way I am when a person is close to me,” he said.

But lately, the President said, he seemed to have run out of jokes on Alcala, that’s why he would often just congratulate him particularly for reducing the country’s rice imports to 600,000 metric tons from 1.3 million metric tons after he took over the Department of Agriculture.

Mr. Aquino said he did not hesitate when he received Alcala’s invitation to the conference.

“When we were still in Congress, whenever the name of Proceso was mentioned, he was already known for the quality of his work,” he said.

Then the President took a light jab at his host, saying he had long known of Alcala’s dedication and effectiveness in public service partly because he (Alcala) is older than him.

Mr. Aquino then recounted an incident at the House of Representatives, when he was still a junior congressman from Tarlac and Alcala was a senior member representing Quezon.

“We were launching an impeachment case then and Procy became a subject of intrigue when somebody told me, ‘Sir, Congressman Alcala will not join you in the impeachment (drive),’” he said.

“I told the media that if that is true, then I will shave off the rest of my remaining hair,” said the balding bachelor President.

Later, Mr. Aquino recalled, he tried but failed to contact Alcala about the rumor. But when Alcala finally showed up at the House session that day, he put all doubts to rest and expressed his support for the impeachment complaint.

“And that is why I say I have full confidence in you, because when you say something it’s really carved in stone,” he said, turning to Alcala who was in the audience.

For a parting shot, President Aquino said Alcala could have been “pirated” a long time ago by the private sector, given the latter’s qualifications and the salary he receives from the government.

“Fortunately, I remain in his wife’s good graces. Therefore, he won’t be pirated,” he said, drawing laughter from the crowd.