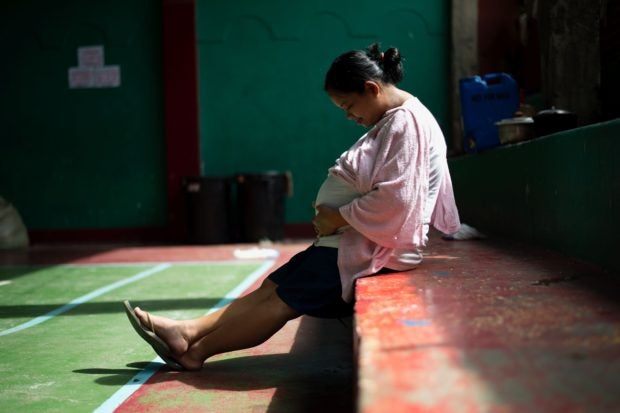 ANYTIME NOW Rosalyne Arat, 30, and into her ninth month of pregnancy, sits at the barangay hall of Buru-un, Iligan City, which serves as an evacuation center for displaced residents of Marawi City where fighting between government troops and Islamic State-aligned terrorists entered its fourth week on Friday. —AFP

Muslim Mindanao health secretary Dr. Kadil Sinolinding said the fatalities include three children, who had died of dehydration, and two adults, who had complications of hypertension.

“There are 40 cases of deaths due to dehydration” and the 19 others had died of conditions existing before the fighting started on May 23, Ubial said at a dengue forum here.

“These patients with health conditions [were] confined in hospitals but opted to [return to the] evacuation centers [where they] succumbed to death due to aggravating conditions,” she said.

“Some evacuees were suffering from kidney diseases and were undergoing dialysis while others died of cancer and heart diseases,” she said.

She said the government had set up 68 evacuation centers in Lanao del Sur, of which Marawi is the capital, Lanao del Norte province, Iligan City and Cagayan de Oro City.

Ubial said health officials were also concerned about the numerous families that remained outside the evacuation centers.

She said 218,551 people were displaced by the fighting but only about 20,000 of them were in the evacuation centers, raising concerns about the health of almost 200,000 people.

“We are monitoring 20,000 evacuees in different temporary shelters and given medical assistance [but] the thousands of evacuees staying outside evacuation camps are our major concern,” she said.

“We are addressing it,” Sinolinding said of the centers under his jurisdiction. “The evacuees are highly vulnerable to water-borne diseases in crowded and unsanitary places.”

Ubial said these diseases were widespread due to the cramped evacuation camps but doctors, including Sinolinding, and health workers were doing daily rounds in evacuation centers.

“We do not want to count deaths when we, as health providers, can do something to prevent it. We should be counting healthy [evacuees],” Sinolinding told the Inquirer by phone.

Since May 23, DOH-Autonomous Region in Muslim Mindanao has provided medical intervention to 4,003 evacuees, including examination, provision of medicine, referrals and hospital care.

The military said many Filipinos are also helping to deliver relief to the evacuees, but Armed Forces of the Philippines spokesperson Brig. Gen. Restituto Padilla said there was no need to aggravate an already dangerous situation.

“You need not personally deliver them yourself because you will unnecessarily put yourselves in the danger areas,” he said during the Mindanao Hour briefing in Malacañang.

Padilla cited the incident where Australian journalist Adam Harvey was shot in the neck in Marawi.

Padilla made the reminder after an aid convoy, led by former Rep. Teddy Casiño, were prevented from entering Marawi City.

“In the interest of safety, we have been working closely with the local government and its social welfare and health arm to provide the services needed by the evacuees without necessarily having other people from the outside exposed to danger,” he said.