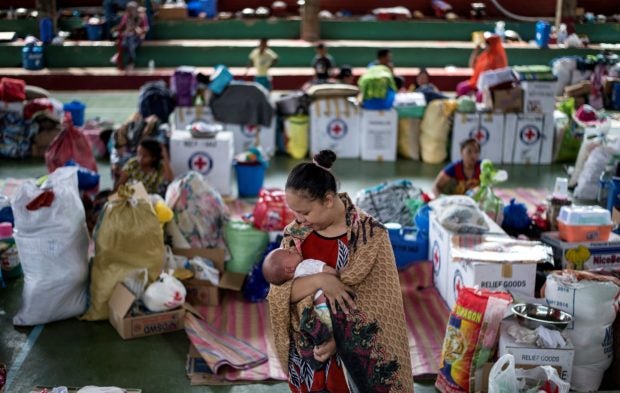 This photo taken on June 15, 2017, shows Raisah Labay gently cradling her newborn at an evacuation center in Buru-on Barangay Hall in Iligan, on the southern Philippine island of Mindanao. AFP

MARAWI, Philippines — Raisah Labay gently cradles her newborn, a boy who was named Martial to mark her flight from a war-torn Philippine city and his birth under newly imposed military rule.

President Rodrigo Duterte declared martial law across the southern third of the Philippines last month in response to Islamist militants going on a rampage in her home city of Marawi, which triggered deadly clashes that show no signs of ending.

Nearly all of the Islamic city’s 200,000 residents have fled the fighting and are now living in overcrowded evacuation centres, where babies sleep on gymnasium floors and makeshift cribs suspended from basketball rings, or relatives’ homes.

“I named him Martial as a sign that he was born in the time of war,” Labay, 21, told AFP while seated on the bleachers of an evacuation camp in a nearby city.

“During martial law, our lives collapsed. Someday I want to tell him about the painful ordeal I went through: going into labour while evacuating our family and telling myself: ‘No, don’t push him out yet’.”

The urban battle began on May 23 when hundreds of militants waving black flags of the Islamic State group occupied parts of Marawi in what authorities said was a bid to declare a caliphate in the region.

Despite a US-backed bombing campaign that has destroyed large parts of Marawi, many militants remain holed up in pockets of the city protected by hundreds of human shields and they are continuing to surprise with their enduring firepower.

Twenty-six civilians, 59 security forces and 225 militants have been confirmed killed in the fighting, according to the government.

Outside the combat zone, refugees are dying from disease and dehydration, with women and children bearing the brunt of the humanitarian crisis, according to local officials and aid groups.

“Almost every day, some people in evacuation centres die — children, the elderly. They get sick but our hospitals are full because of the bulk of the evacuees,” provincial vice governor Mamintal Adiong told AFP.

Nothing but breast milk

In the gymnasium where Labay was staying, 220 people shared a lone toilet and lacked potable water while women were in need of underwear and hygiene kits, social workers told AFP.

Only boxes of relief goods separated families who were huddled on mats, where they crammed in for a humid afternoon doze.

Labay, whose family ran an eatery in Marawi, carried nothing but her two-year-old firstborn in the exodus.

She was lucky to reach a government hospital in time to give birth to Martial, and there were no complications. But now Labay feels desperate.

“We have no money for diapers, milk or clothes for my baby. The only thing I can give him is breast milk,” she said.

Rosalyne Arat, 30, another pregnant woman, said she wanted to get an ultrasound but could not. She said the extent of her medical care at the evacuation centre was some vitamins.

She is set to give birth this month and also plans to name her baby Martial if it’s a boy, or Martiala if it’s a girl.

“It started as a joke for my husband and I but then we thought it was a fitting name,” Arat told AFP.

“What happened in Marawi was a nightmare we never imagined. But we try to be strong because even if we lost our belongings, we are still together as one family.”

With their homes and livelihood ravaged by airstrikes and street-to-street fighting, evacuees face an uncertain future but cling to hopes for their children.

Raisah Labay is determined to ensure a peaceful life for Martial — nicknamed Marmar to also include a reference to Marawi — even if she does not know how right now.

“This is my first time to be an evacuee and I do not want my baby to experience this,” she said.

“If you’ve gone through such difficulty, would you want your child to suffer it too?”