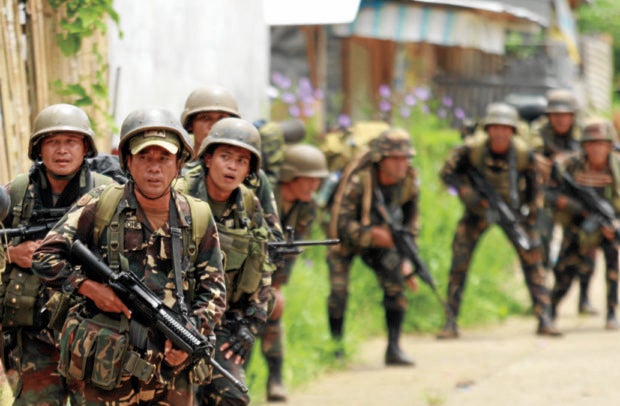 MARAWI CITY – Security forces have continued operations to dislodge up to 200 Islamic State-inspired terrorists in a bid to liberate Marawi City “as soon as possible.”

Fighting is now confined to 10 percent of the total land area of the besieged city— about 8.7 square kilometers — as operations to flush out about 150-200 Abu Sayyaf/Maute terrorists entered its 24th day, according to Lt. Colonel Jo-Ar Herrera, spokesperson of the Philippine Army’s 1st Infantry Division.

Government forces have controlled three key bridges amid bitter street-to-street fighting and security forces have been advancing to the inner parts of the city, Herrera said on Thursday.

The battleground constituted four of the city’s 96 villages, the military spokesperson said.

“We intend to finish the fight as soon as possible. We’re still confronting 150-200 militants,” the Army spokesperson said.

While the use of fighter jets and helicopter gunships to bomb enemy positions in the city has been halted, the military official said airstrikes could resume should the need to use additional firepower arise.

“We have neutralized key enemy positions. (But) our options are still open (for employing airstrikes),” Herrera said.

At least 300-500 civilians are believed to be trapped inside the city and the military is doing its best to locate and rescue them, according to Herrera.

“We’re still receiving distress calls. The challenge now is (how) long their cellphone batteries survive. We’re trying to locate them,” he said.

Herrera said they were still verifying reports about the presence of 300 armed men in a town outside Marawi amid fears terrorists might have been able to slip out of the besieged city and could open a new front. (With reports from Frinston Lim, Inquirer Mindanao, INQ)  SFM