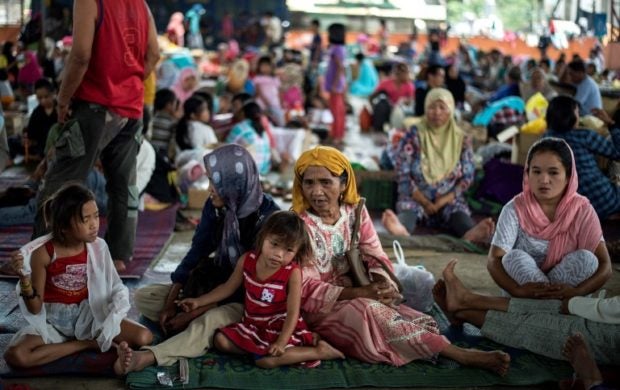 Evacuees from Marawi City camp rest at the Saguiaran Townhall in Lanao del Sur on the southern island of Mindanao on June 5, 2017.
Efforts to rescue up to 2,000 civilians trapped in the fighting between government forces and Islamist militants in a Philippine city failed on June 4 when a proposed truce ended in a hail of gunfire and explosions, authorities and witnesses said. (AFP PHOTO / NOEL CELIS)

ILOILO CITY — Ilonggos are gathering and sending donations to residents of Marawi City dislocated by the ongoing armed clashes between the Maute terror group and government troops.

The Iloilo City council has approved a request of Mayor Jed Patrick Mabilog to allocate P500,000 from the city’s calamity fund for assistance to those affected by the nearly month-long hostilities.

Mabilog has also appealed for donations especially clothes for evacuees. The donations will be collected by the city social welfare and development office and will be shipped to evacuation centers.

Youth and student groups in Iloilo are also campaigning for help in cash or kind for the evacuees.

Student councils including those of Central Philippine University and University of the Philippines Visayas are also campaigning for donations.