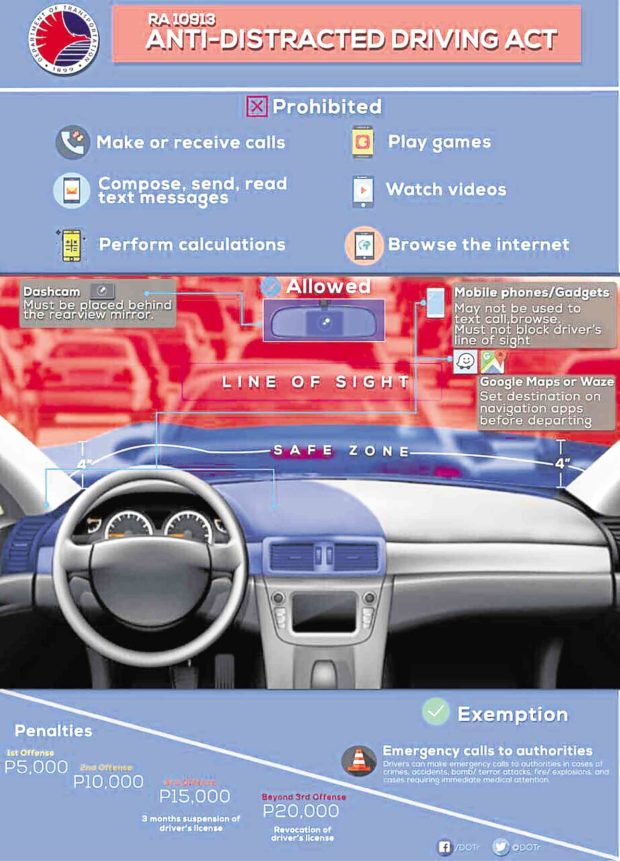 MANILA — The Department of Transportation said on Thursday it has come up with revisions to the implementing rules and regulations (IRR) of the Anti-Distracted Driving Act (ADDA), saying the changes underscored the “noble purpose” of the law to ensure the safety of drivers, their passengers, and pedestrians.

In a statement, DOTr assistant secretary for legal affairs Leah Quiambao clarified that the ADDA only prohibited the holding and using of mobile communications and electronic entertainment and computing device while driving and during the vehicle’s temporary stop at a traffic light or an intersection.

“The law prohibits drivers from holding and using their phones while driving. However, using the hands-free function of these devices is allowed,” she said.

Quiambao also said that while dashboard cameras (dashcams) were not covered by the ADDA, motorists would be encouraged to place such gadgets behind the rearview mirror for safety purposes.

The DOTr official also said the revised IRR has included the definition of the “line of sight” which would allow the mounting of the cellphones and navigational devices within a “safe zone”, or not more than four (4) inches from the dashboard.

This means, she said, that such devices could be mounted below, at the same level, or on top of the dashboard, and even on the windshield, as long as the highest point of the device would be within the safe zone.

The revised ADDA IRR is targeted to be sent for publication within the week, and will take effect 15 days after the actual publication, according to the DoTr.  SFM