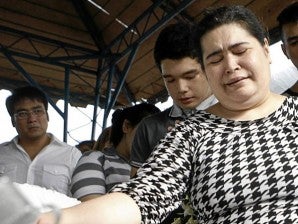 MANILA, Philippines— It was a story with the intriguing elements of a Pinoy telenovela.

According to a show biz insider, former Senator Ramon Revilla Sr. was forced to build a house for Genelyn Magsaysay and their brood in BF Homes subdivision in Parañaque City after his children by the late actress Azucena Mortel objected to the much-younger girlfriend’s plan to move in to the family mansion after their mother died.

Revilla Sr.’s children by Azucena told their father that allowing Genelyn to transfer to the family mansion in Imus, Cavite would be a desecration of their mother’s memory, said the source, who asked not to be named because of the delicate nature of the subject.

At that time, Ramon “Bong” Revilla Jr., now a senator, had also won as Cavite governor while brother Strike won a seat in the provincial board.

The triple victories of her husband and sons so “overwhelmed and excited” Azucena that her blood pressure rose, leading to a fatal heart attack, Revilla Jr.’s sister Princess was quoted as saying at that time.

Their murdered half-brother, Ramgen Bautista, was then only 10 years old, and his mother Genelyn, in her late twenties.

On Tuesday, the source told INQUIRER that Revilla Jr. and his siblings considered Genelyn’s plan to transfer to the mansion as “brazen and audacious.”

“They cringed over Genelyn’s sense of entitlement. She was very insistent on becoming the next matriarch,” the source said.

In an attempt at a compromise, Revilla Sr. had a house built for Genelyn and their nine children in Phase 6-A of BF Homes.

While the two-story structure lorded it over other humbler houses in the area, the source said Genelyn had a hard time accepting that she lived in a “middle-class” neighborhood that was a far cry from the Imus mansion she longed for.

If she felt antagonistic toward Revilla Sr.’s children by Azucena, the feeling was mutual.

“The older children complained that Genelyn had an attitude problem. And even then, she was already a spendthrift. She was always asking for money,” the source said.

In one of Genelyn’s posts on Facebook, she blasted unnamed parties for considering her a “parasite.”

But the source said Revilla Sr.’s older children pointed out that among their father’s numerous girlfriends, Genelyn distinguished herself as the only one who continually asked for cash.

It was a well-known fact among Senate insiders during Revilla Sr.’s incumbency that he provided his girlfriends with capital to start small businesses like beauty parlors and sari-sari (variety) stores.

Insiders fondly called this form of assistance “kabuhayan package,” as it was supposed to enable the girlfriends to become financially sufficient in case Revilla Sr. suddenly goes.

It was not clear whether Genelyn’s foray into business failed to take off or that she simply chose to stay dependent on Revilla Sr.

What became apparent was the older children’s objection to her habit of always asking for money.

“But while the children (by Azucena) disliked Genelyn, they adored Ramgen. He was really close to Bong’s sons Jolo and Bryan because they were about the same age,” the source added.

Ramgen, who was shot and stabbed to death inside the Parañaque house last Oct. 28, was Magsaysay’s first born by Revilla Sr.

His brother Ramon Joseph, 18, and sister Ma. Ramona, 22, have been tagged in his murder.

The source said reports of Genelyn’s allegedly multimillion credit card debt did not surprise the older Revilla children. “As it is, they are shouldering all of Genelyn’s expenses. She does not work and only demands sustento (financial support),” the source said.

AVE party-list Rep. Eulogio Magsaysay on Tuesday said he and his family were supporting half-sister Genelyn and her children, who were currently embroiled in the media hoopla surrounding the murder of Ramgen.

“I will not intervene in the case but (we) are fully supporting her,” said the lawmaker in a phone interview about his half-sister who is currently involved in a word war against Revilla Jr.

Eulogio Magsaysay refused to make any comment on the case, including the alleged involvement RJ and Ramona in the killing of their elder brother and that he has left it to Genelyn’s lawyer to handle the case.

H,e however, was adamant that he did not have a hand in the trip of Ramona, who left in haste on Nov. 4 for Turkey via Hong Kong, where she claimed she was a resident.

Eulogio Magsaysay said that while he supported Genelyn and her family, it would not go to the extent of using his influence to break the law as claimed by some critics.

“I appeal to everybody not to prejudge the case until all evidence and all sides have been aired,” said the party-list lawmaker. With a report from Gil C. Cabacungan Jr.