No bombing of mosques, no new deadline for AFP

The military will not bomb mosques occupied by  Maute group and Abu Sayyaf gunmen in Marawi and will not set a new deadline for liberating the city from the terrorists, the spokesperson for the Armed Forces of the Philippines said on Wednesday.

Brig. Gen. Restituto Padilla, the AFP spokesperson, said Gen. Eduardo Año, the military chief of staff, had promised not to bomb mosques but urged religious leaders to dissuade the terrorists from using places of worship as staging grounds for attacks on government troops.

“There’s a commitment on the part of the Armed Forces and the chief of staff himself that we will not bomb mosques,” Padilla told reporters.

“But we call upon all religious leaders to more or less dissuade any of those that they may reach in those mosques from using those [places] of worship as agents of war in this armed confrontation,” he added. 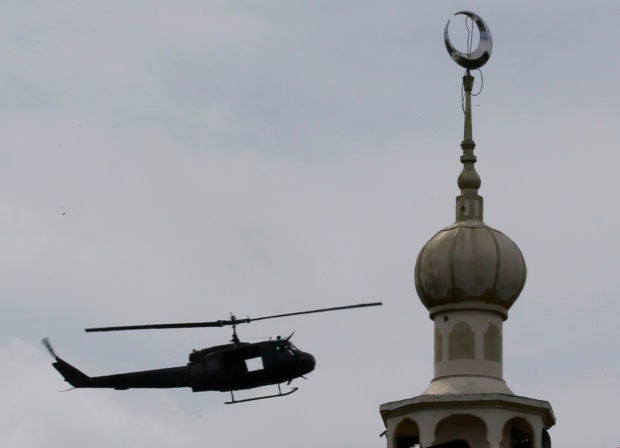 A military helicopter hovers by a mosque as government troops battle with Muslim militants who continue to hold their ground in some areas of Marawi city for almost a week Monday, May 29, 2017 in southern Philippines. Philippine forces control most of the southern city where militants linked to the Islamic State group launched a bloody siege nearly a week ago, authorities said Monday, as the army launched airstrikes and went house-to-house to crush areas of resistance. (AP Photo/Bullit Marquez)

On Tuesday, Lt. Col. Jo-Ar Herrera, spokesperson for the Army’s 1st Infantry Division, said the Maute and Abu Sayyaf terrorists who had seized Marawi were using mosques as storage places for their weapons and as sniper’s nests, forcing the military to consider those houses of worship airstrike targets.

“As long as they’re using [the mosques], we can fire at them as targets of opportunity. If they use them as hiding areas, storage for explosives or machine-gun nests,” Herrera said.

On Wednesday, however, the military said in a statement that it respected places of worship and other cultural and heritage sites.

“As such the chief of staff of AFP gives his assurance that the AFP will do everything possible to protect and preserve these places. We do call on our religious leaders of every faith to call upon all parties to respect these places,” it said.

The military said it had “not bombed and will not bomb mosques” in Marawi.

Padilla said the military was confident that “through other options available,” it would be able to retake Marawi from the terrorists.

A group of imams (worship leaders) in Lanao del Sur

on Wednesday decried the Maute and Abu Sayyaf terrorists’ use of mosques as staging places for attacks on government forces.

Alim Saad Ibrahim Amate, national president of the United Imam of the Philippines, said the use of mosques for launching attacks on enemies or for evading enemies was “evil.”

Amate reminded Muslims that the Prophet Muhammad had specifically instructed his followers not to use mosques in fighting enemies.

The Prophet also prohibited his followers from destroying places of worship and from killing the weak and noncombatants, including priests and monks, Amate said.

The siege of Marawi by the Maute and Abu Sayyaf fighters is a plain act of terror, Amate said, condemning the involvement of some imams in the terrorists’ activities.

“Muslim leaders must safeguard the correct preaching of Islam and not condone beliefs that are not in the Quran and the Hadith,” he said.

“[Our job] is to preach what is good and [prohibit] what is evil,” he added.

Fast losing its capitals in the Middle East to allied forces, IS, to which the Maute and Abu Sayyaf terrorists have pledged allegiance, has called on followers to launch attacks in the United States, Europe, Russia, Australia, Iraq, Syria, Iran and the Philippines during the holy month of Ramadan, which started on May 26.

followers to stage attacks during Ramadan.

Government forces bombarded terrorist positions in Marawi with tank fire on Wednesday, the 23rd day of fighting in the city, and there was no sign that it would end any time soon.

“There will be no more deadlines,” Padilla said, referring to a promise by the military to clear the city by June 12, Independence Day.

“We will progressively get in and neutralize these targets if they opt to keep on fighting. But we will have to do it on a very painstaking manner in consideration of [civilians] still trapped in the area,” he added.

“Urban terrain operations” are “not as easy” for the troops as jungle warfare, for which they have been trained and are used to, battling communist insurgents and Muslim separatists for many years, he explained.

The military said 290 people had been killed in the fighting so far, including 206 terrorists, 58 soldiers and policemen and 26 civilians.