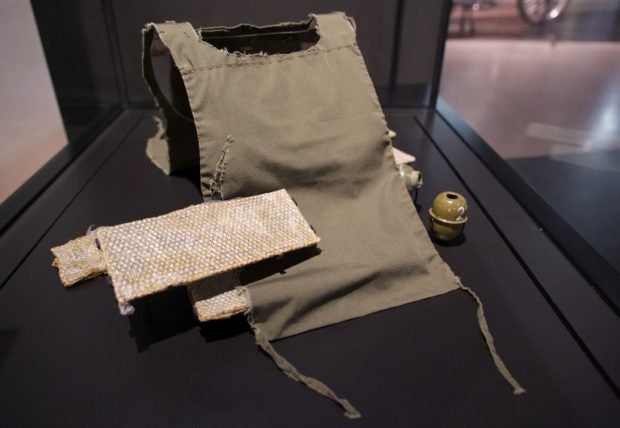 A suicide bomber vest seized by the Afghan National Police in 2013 is photographed at a new exhibition War Story: Afghanistan 2014 at the Imperial War Museum in London on October 23, 2014. AFP

WASHINGTON, United States — The leadership of the Palestinian Authority has agreed to halt payments to the families of suicide bombers, US Secretary of State Rex Tillerson said Tuesday.

Compensation payments to the families of “martyrs” who die carrying out attacks on Israelis are one of the sticking points in the moribund Middle East peace process.

“They have changed their policy, at least I have been informed they’ve changed that policy,” Tillerson told US lawmakers.

US President Donald Trump has vowed to seek to revive the talks, and has urged Israel to limit settlement building on Palestinian land, but many differences remain.

Under questioning at a Senate hearing, Tillerson said Washington had pressed Palestinian leader Mahmud Abbas on the issue of payments to the families of suicide bombers.

“It was discussed directly when president Abbas made his visit with his delegation to Washington,” Tillerson said, adding that Trump had raised the issue at the White House.

Just after this May 3 meeting, Tillerson had a “more detailed” bilateral meeting with Abbas.

“And I told him you absolutely must stop making payments to family members of quote, ‘martyrs’,” he said.

“I said it’s one thing to help orphans and children, but when you designate the payment for that act, that has to stop.

“Their intent is to cease the payments to the family members of those who have committed murder or violence against others.

If the change in policy is confirmed, it could be politically awkward for Abbas, who has committed himself publicly to the peace process but is wary of being seen to make concessions. CBB

Read Next
Carbon monoxide leak sickens 32 people in New York City
EDITORS' PICK
Heads may roll at BOC, says Palace if sugar smugglers are allowed to use recycled import permits
What to watch out for when selecting a video surveillance solution
Apple warns of flaw that lets hackers into iPhones, Macs
House energy committee chair Arroyo bats for cheap electricity
46% of schools nationwide to have full face-to-face classes on Aug. 22
vivo brings to the Philippines a powerful smartphone with a slimmer body, the vivo Y02s for only PHP 6,499
MOST READ
DepEd to give teachers P5K cash allowance within first week of classes
LOOK: Miel Pangilinan dazzles in glittery pre-debut shoot
Man abducted in Batangas gasoline station, found dead in Quezon
Dressing the dead: Indonesian villagers clean corpses in afterlife ritual
Don't miss out on the latest news and information.