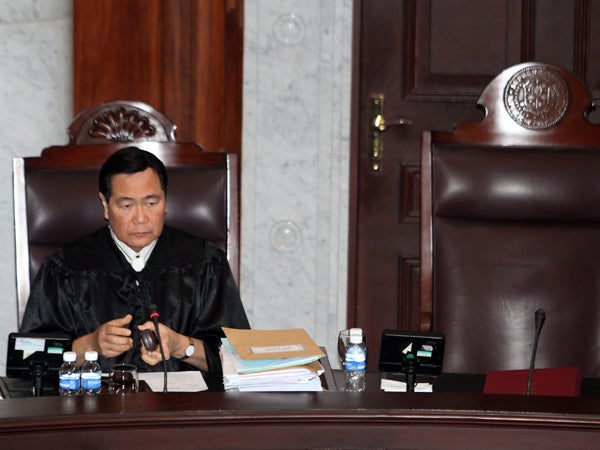 Will Senior Associate Justice Antonio Carpio restrict martial law to Lanao del Sur only? This was the most interesting possibility raised on Day 1 of the Supreme Court (SC) martial law hearings on June 13.

The strongest arguments mirrored my outline last June 3 (“How can Supreme Court cancel martial law?”). The first is that the Maute Group only attacked Marawi, so there is no basis for martial law elsewhere in Mindanao. The Constitution only allows martial law for “actual” rebellion, not mere threat.

Justice Estela Perlas-Bernabe showed openness to this when she asked Rep. Edcel Lagman if limiting martial law’s geographic scope is within the SC’s jurisdiction.

Carpio illustrated the argument by asking Lagman: Was there any report of rebellion in Agusan? Misamis? Davao? Surigao? Dapitan? Pagadian? The Dinagat Islands? There were none.

Carpio emphasized that the Maute Group is based in Lanao del Sur and refer to “IS Ranao” or the Islamic State of Lanao.

He also asked if there is rebellion in the Agusan provinces if a handful of Maute gunmen escape there without their guns. Or if they planned to rebel there but did not yet attack. Seemingly not.

Carpio and Perlas-Bernabe thus hint: Is it proper for the SC to limit martial law to Lanao del Sur? The president is authorized to deploy troops and set up checkpoints elsewhere in Mindanao even without martial law, which is governing an area through the military. Only in Marawi City has civilian government arguably broken down because the Maute Group occupied part of it.

For the second argument, Rep. Edcel Lagman argued the Maute Group was defending itself from a military raid, not rebelling. However, his basis was a confidential military briefing. Justice Presbitero Velasco suggested have the relevant general subpoenaed to prove this point.

Day 1 was hampered by seeming side issues. Some petitioners overlooked that the Constitution allows them to raise only one ground to the SC: lack of factual basis.

Atty. Ephraim Cortez, for example, took heavy fire from Justice Lucas Bersamin. Cortez insisted the government must prove factual basis for rebellion, and it is not up to the petitioners to prove that the government’s facts are deficient. Cortez even (tenuously) argued that any doubt in the facts must be interpreted against the government.

A frustrated Bersamin eventually asked if Cortez wanted to subpoena the President. He declined. Cortez suggested that the facts must reflect a magnitude of violence. Bersamin asked how many corpses the SC needs to see. Cortez said he could give no fixed number.

Carpio told Cortez that the president sent a report to Congress and the Solicitor General outlined additional facts in his response to the SC petitions, making it clear what facts were being debated.

The lead justice, Mariano del Castillo, pounced on such side arguments when he opened questioning of Lagman. For example, Lagman argued it is problematic if generals do not recommend declaring martial law but the President overrules them. This is difficult to accept as the President is the Commander-in-Chief.

Lagman also argued that the President’s report claimed that Amai Pakpak Hospital was occupied by Maute gunmen but the hospital administrator later disclaimed this. He argued there was a litany of these errors. However, del Castillo posited one must review facts holistically, not individually.

Carpio is a force in oral arguments and lawyers study his dissent in the 2012 Fortun case, on martial law in Maguindanao in 2009. The petitioners would do well to follow his lead and focus their arguments, not get sidetracked on tangents like subpoenas for the president.