President Rodrigo Duterte did not attend the 119th Independence Day celebrations on Monday at Rizal Park.

“Pinapaalam lang ng opisina ng presidente na hindi sya makakarating ngayong umaga (The Office of the President is announcing that the President won’t be able to be here this morning),” Abella said.

“Sa palagay natin meron s’yang hinaharap na ilang bagay upang maayos yung mga challenge sa bayan (In our opinion, he has to do some thing to address the challenges faced by the nation),” Abella said, referring to the Marawi City siege.

After the flag-raising and wreath-laying activities in Luneta, Cayetano told reporters that Duterte was not feeling well that morning.

“You know that the president has been working 24/7, meeting the troops, meeting the commanders and then late last night visiting the wounded and mga namatay (and those who died),” Cayetano said.

“So that’s why this morning he did not feel that well. Nothing to worry about,” he added. “But it’s better for him to rest this morning.”

He said the President barely slept and was feeling tired.

Cayetano pointed out that the government has been working hard to meet its target to liberate Marawi City from terrorists on Independence Day. However, he said the situation is “complex.”

“I think precisely that’s why he’s resting or hindi sya nagpilit na magising kasi napakahirap ng two o three oras lang tulog mo (he didn’t force himself to wake up because it’s hard when you only have two or three hours of sleep),” the Secretary said, referring to Duterte’s visits to Mindanao.

Cayetano further explained that Duterte decided to earlier cancel the annual vin d’honneur in Malacañang because “he doesn’t feel like giving a toast” when there are soldiers dying and many people are displaced by the fighting.

“He really intended to focus almost 100 percent of his time on resolving not only the Marawi situation but the situation in whole Mindanao,” he said. CBB 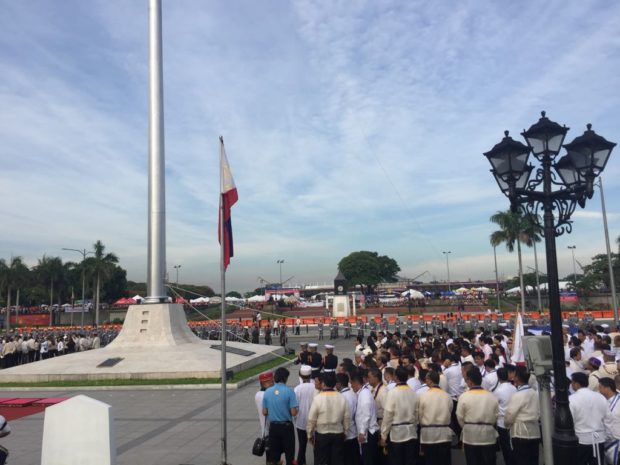 The Philippine flag is raised at the Rizal Park Monday, June 12, 2017, for the 119th Independence Day commemoration. President Rodrigo Duterte did not attend the rites because he had to attend to matters currently confronting the nation, according to Presidential Spokesperson Ernesto Abella. PHILIPPINE DAILY INQUIRER / JOAN BONDOC