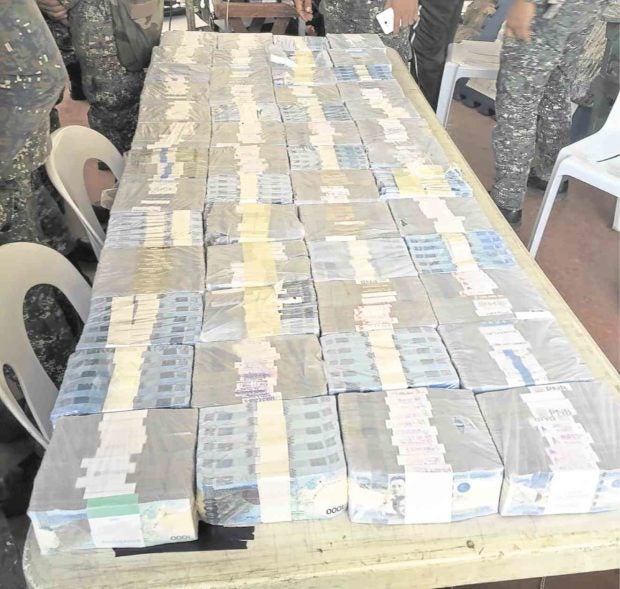 Soldiers show media P52 million cash that they found in the vault of a house in Marawi City and which they turned over to higher authorities. Despite the transparency showed by government forces in clearing the city of Islamist terrorists, a group of Maranao lawyers are accusing soldiers and policemen of illegal search and seizures. CONTRIBUTED PHOTO

ILIGAN CITY – Lawyers in Lanao del Sur on Friday said that while they supported and recognized the “constitutional prerogative” of President Duterte to proclaim martial law in Mindanao to contain the problem of extremism, they were apprehensive of what would become of Marawi City.

“While we fervently pray and desire for the government to restore peace and order in the city and return to our homes as soon as possible, we also passionately appeal to the wisdom of the President to avoid turning our beloved Marawi into a city of ashes and embers,” Meno Macalandap, president of the Integrated Bar of the Philippines Lanao chapter said in a statement approved by his fellow IBP officials.

Macalandap said the “horrific chain of events” that followed the May 23 clashes was deplorable as it did not only result in damage to infrastructure but also massive displacements.

“While the residents of Marawi City are relieved that the military has taken charge to overcome the Maute Group and make the city safe again, there is growing concern about the military’s “surgical airstrikes” which continues to destroy several buildings and homes of innocent civilians,” he said.

Macalandap said IBP Lanao del Sur was also concerned about “reports of callous military men who disregard human rights and who destroy or take away random properties of civilians in conducting its house-to-house searches.”

These incidents, he said, ran contrary to the constitutional guarantee that the declaration of martial law does not suspend “the operation of the Constitution, nor supplant the functioning of the civil courts or legislative assemblies, nor authorize the conferment of jurisdiction on military courts and agencies over civilians where civil courts are able to function, nor automatically suspend the privilege of the writ of habeas corpus.”

Macalandap stressed that the IBP was only voicing its concerns against reported abuses and the destruction of Marawi City but it wanted authorities to put an end to the terror caused by the Maute group.

He said the acts of the Maute group caused “immeasurable damage to Marawi City and terrorized the residents, to such a scale that a humanitarian crisis may be unfolding.”

“We categorically denounce their acts of lawlessness, their violent ideology, and their contemptuous disregard of innocent lives,” he said.

But he said while the campaign against terror was ongoing, the constitutional safeguards should be complied with.

“We appeal to the government to implement its military actions in a manner that will minimize damage to property and with due consideration of the rights of innocent civilians caught in the warzone,” Macalandap said.

He said the IBP Lanao del Sur was also willing to assist victims of excesses by the military and the police, as he reminded them that “unnecessary harassment of civilians in implementing precautionary measures” should be avoided.

“We remind our men in uniform that any person taken into custody for invasion or rebellion should be released after three (3) days if no charge has been filed against him. We call on the people to respect the Martial Law declaration and to cooperate with authorities in the implementation of additional, albeit inconvenient, safety measures,” Macalandap added.

In a separate open letter to Duterte, Maranao lawyers said they were utterly shocked, “to use a milder term, by sheer magnitude of wanton disregard of sanctity of domicile, the right against deprivation of property without due process of law, the right to be secure in one’s person, house, papers and effects against unreasonable searches and seizures and the privacy of communication and correspondence of innocent civilians committed by AFP and PNP who take pride of being the protector of the people.”

It said warrantless searches were being carried against residential and commercial establishments “bearing no badge of suspicion linking to Maute Group.”

“As a consequence of illegal searches and seizures, rampant loss of valuable personal belongings of innocent and helpless civilians has been reported,” the IBP added.

It lamented that while all of these were happening, “no one raises a voice of dissent.”

Contrary to the accusations of the Maranao lawyers, soldiers last week brought attention to P79 million in cash and checks that they found in an abandoned house in Marawi.

“The deafening silence in the Congress, appropriate government agencies and even the mainstream media on the matter is not only alarming but construed as an implied approval of unspeakable acts bestiality,” the IBP said.

It described the searches as “wholesale, illegal and unparalleled that even the martial law years under Marcos “pales in comparison thereto.”

“Thus, the IBP-Lanao del Sur Chapter hereby expresses its severe outrage and condemnation over illegal searches and seizures in Marawi City by military men, police and other law enforcement agencies which results in rampant loss and deprivation of properties and possessions of innocent civilians,” the Maranao lawyers said.

They called on Defense Secretary Delfin Lorenzana to “act decisively” and order a halt in the searches and arrests without warrants and return all properties illegally seized.

They asked Duterte to create a credible investigating body composed of independent groups and individuals to look into the excesses that authorities might have committed in Marawi City. CBB/rga