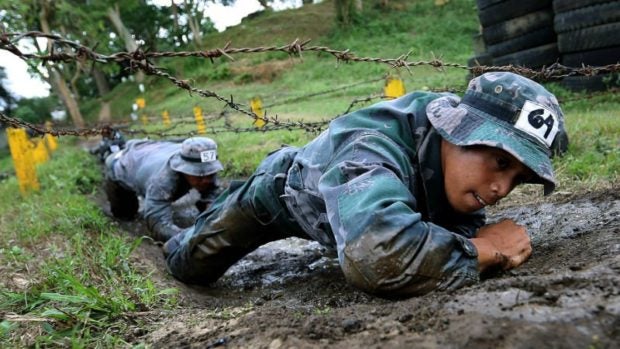 Policemen aspiring to become members of the Special Action Force (SAF), an elite unit of the Philippine National Police, go through rigorous exercises at the SAF Training School at Fort Sto. Domingo in Sta. Rosa City, Laguna, in this photo that was published in the Inquirer on Jan. 31, 2016. On June 8, 2017, a trainee of the Army died of heat exhaustion in Camp Melchor dela Cruz, headquarters of the 5th Infantry Division, in Isabela. RAFFY LERMA

Jackson Lataan Manallog, of Cabagan town, collapsed Thursday afternoon and was brought to the Isabela Doctors General Hospital where he was declared dead at 10 p.m.

Doctors said Manallog died due to “cardio-respiratory arrest, secondary to heat exhaustion” despite efforts to resuscitate him.

The Army has ordered an investigation into the death of Manallog “in order to gather facts (and) to determine the circumstances (of his death).”

“All the selected recruits passed the prescribed examinations and had undergone the tedious process of selection. They were ranked according to the results of their examinations, both intellectually and physically,” said Lt. Col. Camilo Saddam, 5th ID assistant chief of staff for personnel.

The group was composed of college graduates, 51 who attended college and 61 high school graduates, the Army said. CBB/rga